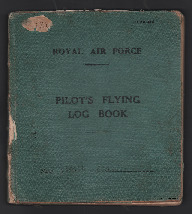 Weather was atrocious on this our first trip, with cumulo-nimbus clouds rising to 25,000 feet. We were continually flying in and out of these clouds at 23000 feet. About halfway to the target from the Dutch coast, the pitot head iced up with a resultant loss of indicated air speed (nothing on the clock.) We continued to the target without I.A.S. and it wasn’t until I was descending over the North Sea on the return journey that the pitot head thawed out and we regained air speed on the indicator. At the debriefing when we arrived back at Syerston, Air Vice Marshal Cochrane C. in C. 5 Group congratulated me on bringing the aircraft back from what could have been a disastrous operation for us.

LANCASTERS played a game of hide-and-seek with German flare-dropping fighters and searchlights among thick clouds over Germany on Wednesday night – and won.

The clouds were so thick in places on the 600-mile route to Leipzig that the searchlights could not even light them up from below and flares merely glowed feebly.

But while the weather hampered the German defences it also made difficulties for the raiders which flew through snow, terrifice [sic] hail, and electrical storms.

Great blue flames of lightning glowed round the planes blinding the fliers.

Most of the planes got through to Leipzig, aircraft building city of 700,00 people, without sighting a single German fighter. They unloaded their bombs through gaps in the clouds.

One Lancaster, however, piloted by Flight-Sergeant F. J. Stuart, of Newcastle-on-Tyne, had to fight off seven air attacks on the round trip. The bomb-release gear was damaged, but the crew delivered their cargo by hand.

At least one German fighter was shot down by the Lancasters.

Mosquitoes bombed Berlin the same night, causing more damage than is usual in their raids, according to Berlin reports.

Attacked three times by fighters at different times. The ill-fated attack took place 20 mins. off of target. Enemy fighter unseen opened fire with cannon & machine gun fire from starboard quarter down. Bursts hit & killed Jock Jamieson in mid upper turret, I think it killed George also. Set port main plane on fire & both engines, controls were shot away & I gave the order to bale out. Wally jumped, heard Joe say “I can’t get out Dick” I was hit in right ankle by shrapnel. Aircraft must have then exploded. [inserted] with full bomb load [/inserted] I cannot remember anything until a few seconds before I hit the ground.

The parachute was open above me with holes burnt through here & there. When I hit the ground my weakened right ankle was fractured & my left ankle badly sprained. I was captured & taken prisoner. 5 of crew were killed (4 by explosion) why I was not killed I do not know. Wally was taken prisoner.

97 Bombers lost on this operation. (Highest losses of the war)