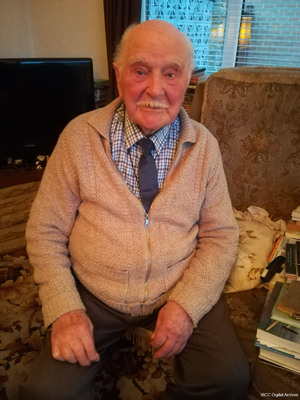 Before joining the Royal Air Force on 4 February 1942, Ernie worked as an apprentice joiner. On being called up he went to Blackpool for training, which included Morse code. Following training at different places he then attended the advanced flying school. After travelling to RAF Abingdon for crewing up they trained on Whitleys and then Halifaxes. From there they went to RAF Downham Market to train on Pathfinders. Ernie was transferred to another crew to replace their wireless operator who had been killed. When flying, members of the crew each had a ration of six boiled sweets, a handful of raisins, a packet of chewing gum and a block of chocolate. He explained about dinghy training. Ernie recall an operation when they had a recall to bomb Osnabrück; another squadron did aa operation to Nuremberg and lost 95 bombers in that one night. The crew did a daylight operation on Nuremberg and they were escorted back by two Mustangs. Ernie remembers buying a Morris Minor from a colleague and describes the mishaps he had due to its poor brakes. Ernie met his wife at a dance at the Corn Exchange in Wisbech. His son was born while he was posted in India. He had 350 flying hours in Lancasters, 250 of which were operational. He was awarded the Distinguished Flying Medal a Pathfinder Award Badge. At the end of the war he was offered a commission but didn’t take it as he wanted to return to civilian life.