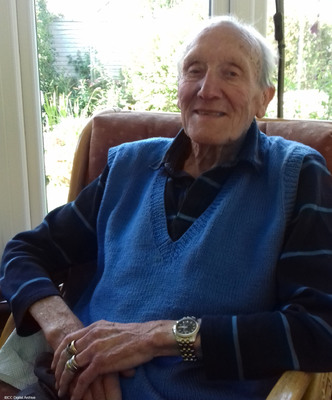 Norman Wilkins was born in West Norwood. At the age of fourteen he joined the Air Training Corps and became a member of Brighton and Hove Air Cadets 176 Squadron. He then joined the University Air Squadron at Oxford, with fees being paid by the Royal Air Force. In 1942-1943 he was sent to Winnipeg for navigation training. At the end of the course he was nominated for the Pathfinder Training Unit at RAF Oakington. Norman did astro navigation on one occasion. He also did a course on the radar navigation system and was posted to RAF Finningley for about two years and a half. Norman flew in Lancasters and was also involved in Operation Manna. He then became president of the 7 Squadron Association which meets once or twice a year.