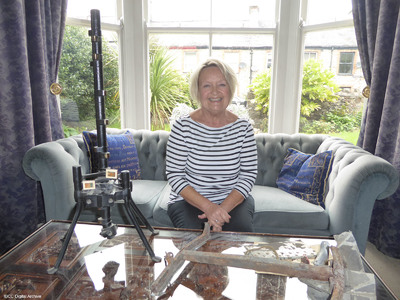 Carolyns father, Arthur, joined the Royal Air Force on his 18th birthday. Following his training as a flight engineer, was posted to RAF Winthorpe. He was allocated to a crew consisting entirely of Australians. In February 1944 the crew were posted onto Lancaster aircraft of 463 Squadron at RAF Waddington. On the 7th May 1944, they were posted to 97 Squadron at RAF Coningsby. It was from RAF Coningsby on their 21st operation on board ND 764, they were shot down 30 miles south of Paris. Carolyn describes in detail the events, from the aircraft being damaged by anti-aircraft fire and then being attacked by a Luftwaffe fighter, to the escape from the aircraft and subsequent contact with French civilians who sheltered him up to his return to the UK after the liberation of Paris in August 1944. Following his return, Arthur was granted three weeks leave. He did not return to flying, instead he retrained and became an air traffic controller. He was posted to Scotland, and it was here he met his future wife. In the 1970’s, whilst on a holiday in Europe, her sister managed to establish contact with members of the French Resistance who had sheltered Arthur. In 1977 Arthur was able to visit them and the graves of his fellow crew who did not survive and remained in contact for the remainder of his life. Carolyn recalls her father describing a superstition the crew used to carry out before each opeion. Each crew member would urinate on the aircraft wheels before boarding. Several members of the Women's Auxiliary Air Force came to wave them off on their last opeion and discretion meant they were unable to carry out their routine.