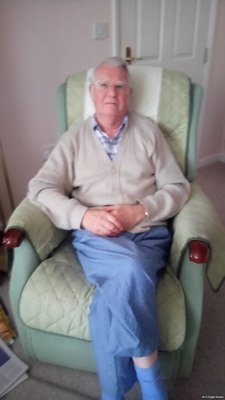 Ken Hayton’s father, George Stanley Hayton (Stan), worked worked for Lloyds Bank. In 1940 Stan left his post to join the Royal Air Force; Ken recalled going to Durham station to see his father off, travelling to start basic training at RAF Padgate. Ken believes his father completed his training as a fitter armourer at RAF Lytham before joining 97 Squadron at RAF Woodhall Spa. When 617 Squadron replaced 97 Squadron, Ken remained and was involved in bombing up 617 Squadron aircraft ahead of the Dambuster operation. Stan was sent to help with the clear up of a Lancaster crash on land near a bomb dump and for the rest of his life he could not stand the smell of lamb being cooked. Towards the end of the war Stan was posted to RAF Riccall where he prepared redundant .303 browning aircraft guns for storage, he was finally demobbed from RAF Waddington in 1945 and returned to Lloyds Bank where he remained until retirement. After the war Stan trained for his private pilot license at Newcastle Aero Club and took both Ken and his mother flying in the club’s Tiger Moth.

Ken describes his schoolboy life in Durham, including leaving the Anderson Shelter one evening and watching searchlights scanning the sky over Sunderland. One bombing on Durham was shortly after Coventry had been bombed: the mist rose from the river and shrouded the city, with local folklore being St Cuthbert protecting the Cathedral. During his father’s service at RAF Woodhall Spa, Ken recalled travelling there with his mother from Durham by train and seeing extensive bomb damage to York railway station. Ken served three years in the RAF, posted to RAF Insworth a non-flying RAF station where the RAF Records Section was based, transferring to the Coronation Unit for training ahead of the ceremony in 1953. He recalled route lining in the Haymarket, due to the narrowing of the road he was very close to the Queen’s coach and in the evening went to Buckingham Palace and assisted the police with crowd control. Ken recalls watching The Dambusters film with his father in 1955 and his father commenting on the accuracy of the film.