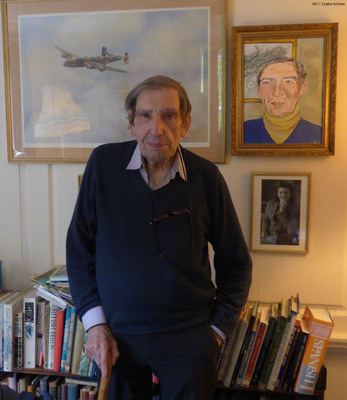 John Dean’s childhood memory of watching a Spitfire and a German aircraft having a dogfight in the sky above him spurred him to want to become a Spitfire pilot. He didn’t achieve his aim of becoming a Spitfire pilot and instead became a navigator. On one operation the Flight Engineer noticed the Lancaster immediately above them and then saw the bomb fall from it and in to their own aircraft from where the crew argued what to do with it. On his first operation he realised to his horror that he had turned the aircraft too early and they were far off target but they managed to rectify their mistake and complete the operation.