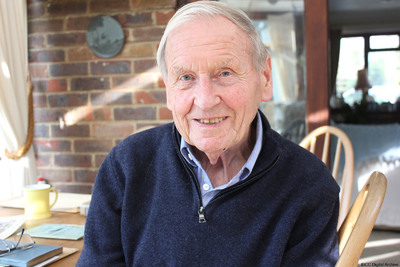 At the start of the war, Doug Beasley left school at 16 to start work. Initially a member of the Air Training Corps, he was sent for aircrew selection when he became 18. There was a 12-month wait to enlist as a pilot, so he opted to become a flight engineer. He joined Number 3 Initial Training Wing in Torquay, after spending three weeks at Lord’s Cricket Ground, in October 1943. Many of his fellow intake were ex-police officers, older as they were not released from the police until they were 30 years old. After six weeks he was posted to RAF St Athan for basic training as a flight engineer on Halifaxes, then to 1652 Heavy Conversion Unit at RAF Marston Moor. It was here that he was formed in to a flight crew when they transferred from their Operational Training Unit. At this stage they were flying the Halifax II and V. It was with this unit that he flew his first operation, a leaflet dropping operation over France on 12th August 1944. He joined 76 Squadron at RAF Holme-on-Spalding Moor flying the Halifax III. He describes in detail many of his operations, mainly over Germany. One in particular occurred in January 1945 when his aircraft was attacked by a Ju 88 night fighter. Though struck by many bullets and cannon shells nothing vital was damaged though the pilot’s neck was grazed by a bullet. After completing his tour of operations, 38 rather than the normal 30, he became an instructor with an operational flying unit flying Wellingtons. In 1946 he became the Air Sea Rescue officer attending a course at RAF Calshot. He left the RAF in 1947 to return to civilian life.