58 items. The collection concerns Andrew Bain (1916-1943, 658930, Royal Air Force). He joined the British Army in September 1939 and transferred to the RAF in October 1941. He was killed in action 23/24 August 1943. Collection includes: observer's logbook, pay book, photographs (some loose, some in album), letters (numerous), brevets and badges, medals, ribbons and BC Clasp. Includes correspondence received by Andrew's widow Isabel following his death and a list of his effects.

Additional in formation on Andrew Bain is available via the IBCC Losses Database.

The collection has been loaned to the IBCC Digital Archive for digitisation by Lorna Aitchison Howieson and catalogued by Trevor Hardcastle.

This is the Log Book of Andrew Bain covering the period from 26 June 1942 until August 1943. In June 1946 the log book was stamped by the RAF Central Depository ‘Death Presumed’. He qualified as an Air Gunner on the 31 October 1942 and as an… 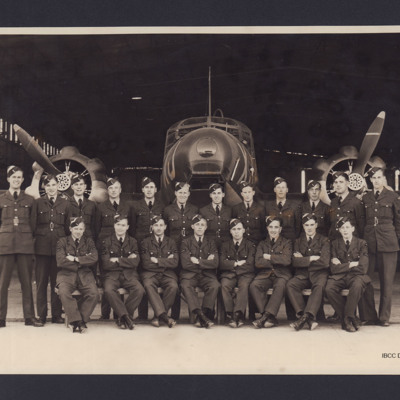 20 airmen with aircrew training flashes in their caps, in two rows for their formal course photograph, when under training in South Africa, in a hanger in front of an Anson with XJ unit markings. On the reverse 'Bell, Beckett, Blight, Bashford,… 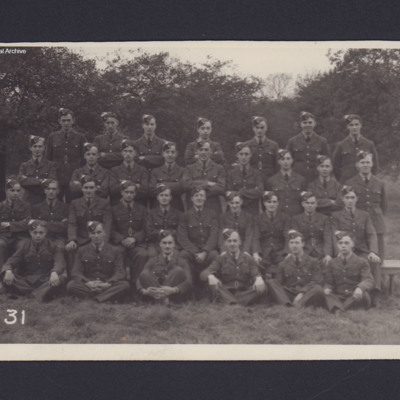 33 airmen, arranged in four rows for their formal course photograph, 32 have aircrew under training flash in their caps. On the reverse is note: 'subject right row 3', indicating third row from bottom. On grass with small trees, hedge and flower bed…

Andrew Bain with another soldier 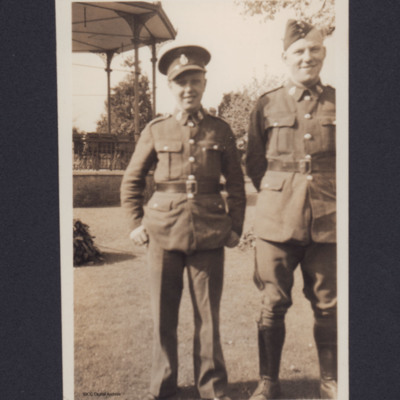 In uniform. Standing on the grass, band stand in background. On the reverse 'MAY 1940, SHERBORNE PARK, CURRIE AND AB'. 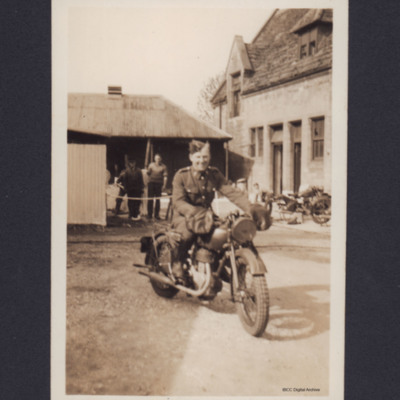 In uniform, seated on motorcycle. In a farmyard, with another motor cycle , farm house, farm buildings and two individuals in background. On the reverse 'April 1940 Sherborne'.

Andrew Bain with another soldier and woman 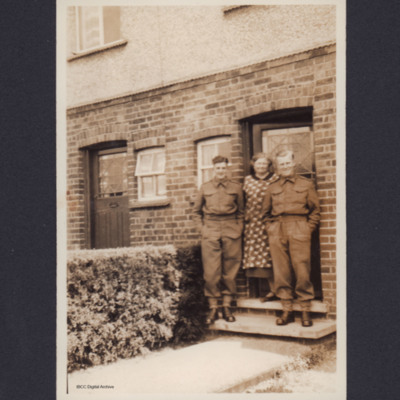 Standing on front steps of a house, men either side of older woman in apron. On the reverse 'June 21st 1940, Cambridge, 101 Mowbray Road, "Back from France", Jackson, Auntie Pollendine, and AB'.

Andrew Bain with seven other soldiers 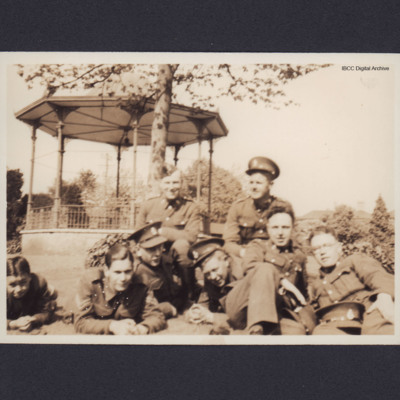 Soldiers lounging on the grass with bandstand in background. On the reverse 'MAY 1940 SHERBORNE PARK, McINTOSH, DAVIDSON, AB, McDONALD, SMITH, CURRIE, HASTIE.'

To Isabel Bain from Air Ministry 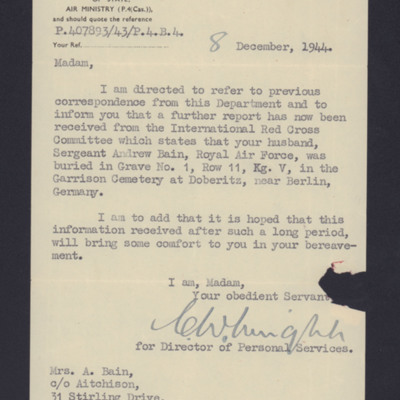 Gives location of Andrew's grave in the Garrison Cemetery, Doberitz, near Berlin. 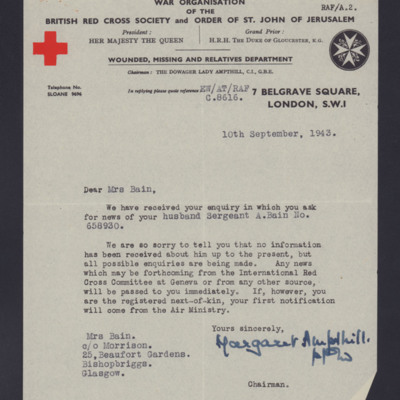 In response to Isabel's enquiry about possible news concerning Andrew, stating that nothing has been heard so far.

To Isabel Bain from the British Red Cross Society 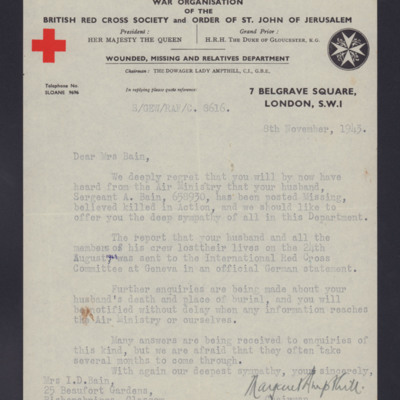 States that Andrew has been listed as 'Missing, believed killed in action'. An official German source has informed the International Red Cross Committee that Andrew and the other members of the crew died on 24 August 1943.

To Isabel Bain from the British Red Cross Society 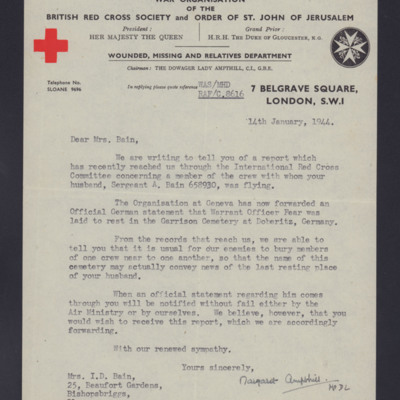 Letter states that Warrant Officer Fear, Andrew's captain was buried at Doberitz (near Berlin) and it is likely that Andrew would also be buried there. When there is official confirmation, either they or the Air Ministry will send it to her. 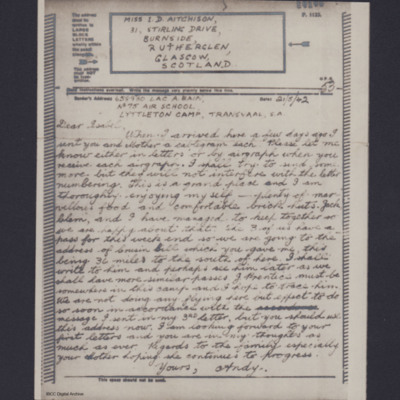 An aerogram written when Andrew was training in South Africa at no. 75 Air School, Lyttleton Camp, Transvaal. He writes that the food and accommodation are good and he hopes to visit her cousin Bill who lives near by. 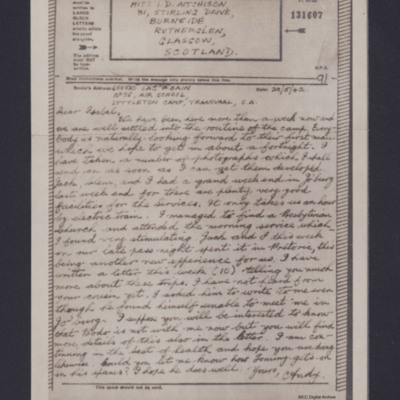 An aerogram written by Andrew when training in South Africa. He has now been there a week and has visited Johannesburg and Pretoria. 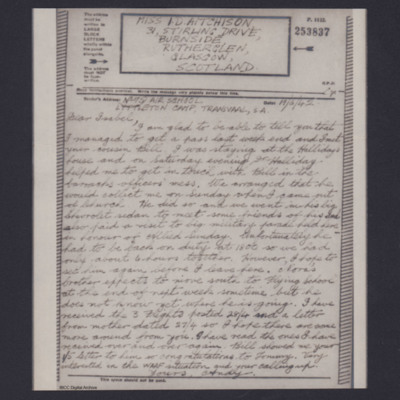 An aerogram written when Andrew was training in South Africa. He has met her cousin Bill, has only had a few letters, and is interested the 'WAAF situation' and Isabel being called up. 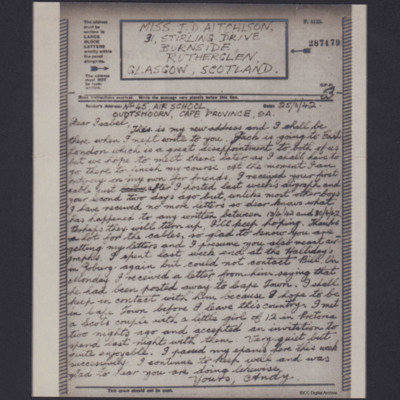 An aerogram from Andrew training in South Africa. He has just been posted to no. 45 Air School. Some of her letters seem to have gone missing. 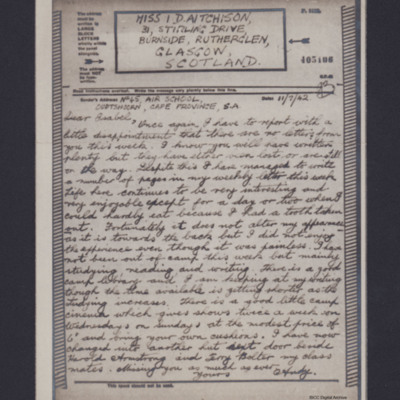 An aerogram written from Andrew training in South Africa. Comments on lack of letters, that he has had a tooth removed and moved huts. He has been studying quite hard, helped by a good library at the camp, and there are film shows three times a week. 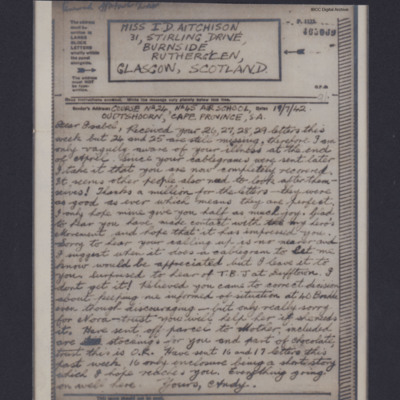 An aerogram from Andrew training in South Africa. Comments on the arrival of four of her letters (only two now missing) and replies to several things in them. His sent a parcel to his mother including stockings and chocolate for Isabel. 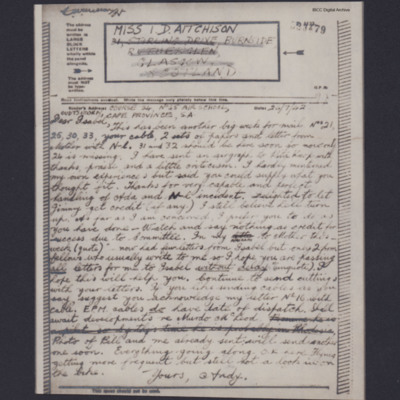 Written on an aerograph from Andrew training in South Africa. Mainly about letters from home: has just received four of her letters. Various references to awkward situations at home.

Official confirmation of the death of Andrew Bain 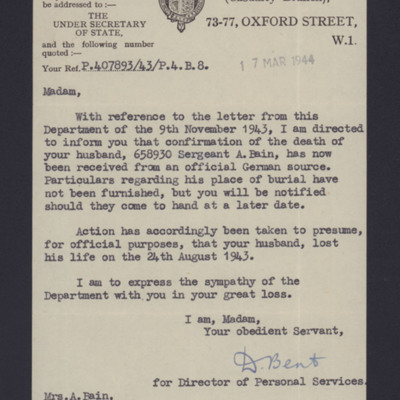 To Isabel from Casualty Branch confirming that information had come from an official German source confirming Andrew's death on 24th August 1943.

To Isabel Bain from Air Ministry 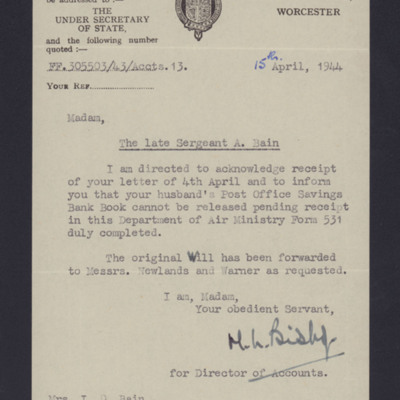 Air Ministry Accounts need a completed Air Ministry Form 531 before they can release Andrew's Post Office Savings book. The original of his will has been forwarded to Messrs Newlands and Warner.

To Isabel Bain from Commanding Officer no. 75 Squadron 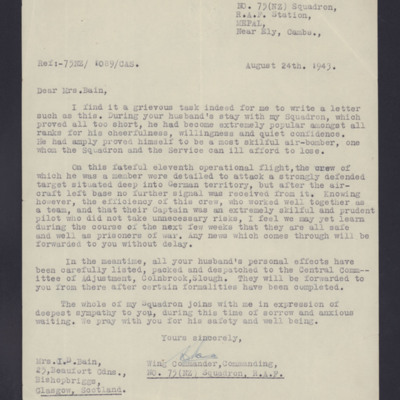 From Andrew's squadron commander expressing his sympathy at her loss. Andrew was popular for his 'cheerfulness, willingness and quiet confidence' and was a skilful air-bomber. He was on his 11th operation from the base.

To Isabel from Air Ministry 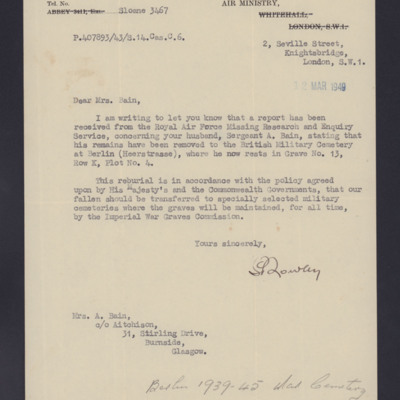 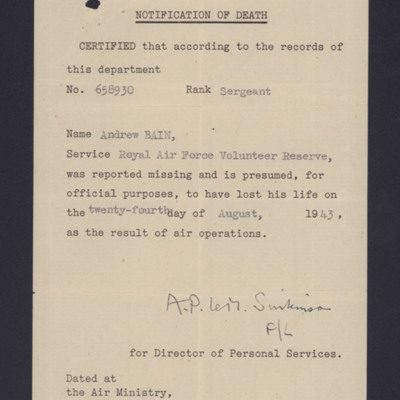 For official purposes, any serviceman missing on operations, assuming nothing more is heard over a set period, is assumed to have died so that pay, pensions etc can be processed.

To Isabel from Central Depository regarding Andrew Bain's effects

One letter includes reference to the different procedure for a serviceman presumed killed in action (after missing in action for more than six months) or a prisoner of war. One letter is in reply to one from Isabel in which she asks about a missing… 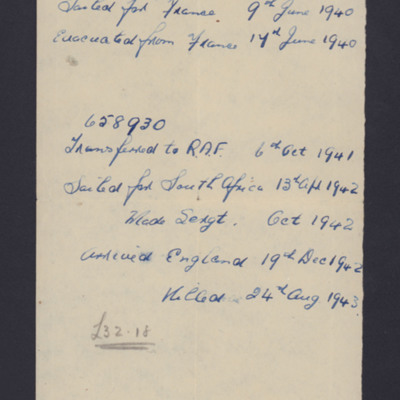