Interview with Bill Moore. One 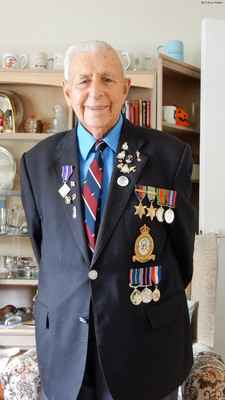 Interview with Bill Moore. One

William Moore was born in Dunoon, Scotland in August 1924 and joined the Royal Air Force after spending some time in the Air Cadet Defence Corps and in the Air Training Corps. He volunteered for the Royal Air Force at the age of 17 and completed his training in Canada, after which he qualified as an air observer.
William flew Ansons and Cranes and learned navigation in America on Catalina flying boats. He also tells of flying Lysanders and transporting agents for the Special Operations Executive into France. He also tells how he helped Polish airmen with different information to keep them safe if they crashed.
William flew a number of aircraft including the Lancaster, Stirlings and Halifaxes at different locations and was on 36 operation with Bomber Command, taking part in Operation Manna. He served with 138 Squadron and 161 Squadron. He also tells of his life after the war, when he went to live in Rhodesia where he helped to run the family business before returning to Great Britain in 2003.