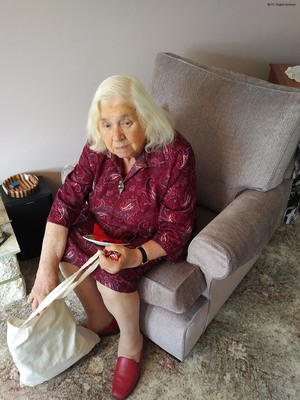 Vera was born in the Myrtha Tydfil area of Wales. Vera went to the grammar school at Chepstow before getting work in the cashier’s office at the Royal Navy Propellant Factory. After joining the Women's Auxilliary Air Force, Vera was posted to various locations until she volunteered to go to Singapore when the Malayan campaign was still in force. Vera and her colleagues stayed in accommodation previously used by the prisoners. She then went to the Cameron Highlands and then on the train to Kuala Lumpur. She was in Singapore for 13 months and she remembers the Britannia being in the harbour for the Queen’s honeymoon in 1947. They had quite a social life and she enjoyed dancing. On her return from Singapore Vera became a corporal pay clerk, then got to work with the Ministry of Health in London. She left the job when she married Douglas whom she had met at an RAF Association dance. Her husband, Douglas, had been in Bomber Command as a rear gunner. He started on Wellingtons and then Halifax aircraft. He did a total of 41 operations and was awarded the Distinguished Flying Medal. When the war ended Douglas was posted to India as equipment assistant. After leaving he found work near Southampton. Vera occasionally attended reunions but Douglas did not.