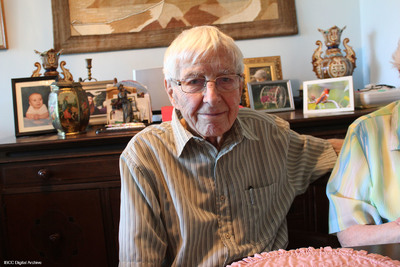 Andrew Carswell volunteered for the Royal Canadian Air Force in his native Toronto. He trained as a pilot and on arrival in the UK and completion of his further training he was posted to 9 Squadron. His first operation was to Berlin. On their final operation they were attacked by a night fighter and in the subsequent departure from the aircraft one member of the crew broke his leg, one crew member’s parachute didn’t open and another had resisted all prompts to leave the aircraft. Andy was taken as a Prisoner of War and was sent to Stalag 8B which he escaped from twice before being recaptured.