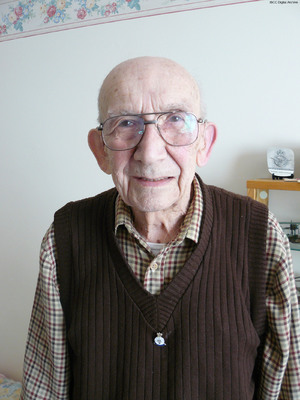 Richard Curnock was born in Grantham and joined the Royal Air Force in 1941. He achieved the rank of warrant officer and served in 425 Squadron. Richard tells of how he followed his two older brothers into the services, and his time serving in the Air Training Corp and in the Heavy Conversion Unit. Richard was in a Canadian crew and baled out after his aircraft was hit. He talks about his capture including details of United States Army Air Force aircrew being hanged from lamp posts and interrogation at the hands of the Gestapo. Talks about his time as a prisoner of war in Stalag Luft 6. Richard took also part in the long march, when prisoners were moved west ahead of the Russian advance. Recollects when they were strafed by mistake by Typhoons, being flown back home, and his post war service in Italy dismantling Spitfires.