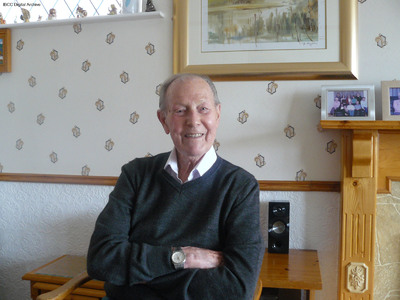 Don Crossley was born in South Emsall in 1924. He tells of his time before the war working at Upton Colliery before joining the Royal Air Force. He volunteered and trained initially as a wireless operator / air gunner. He tells of his experience at the aircrew receiving centre and his training at the initial training wing before his assignment to an operational training unit for crewing up. After serving in a heavy conversion unit, he was posted to 100 Squadron. He flew on Ansons, Lancasters, Lincolns, Yorks and Hastings. He was in Pathfinders force with 8 Group, 582 Squadron, and took part in operations Exodus and Dodge. Don was demobilised in 1947 but returned to take part in the Berlin airlift and also in Korea. He finally left the Royal Air Force in 1956. Don tells about his post war life doing manual labour and then a job with the Central Electricity Generating Board.