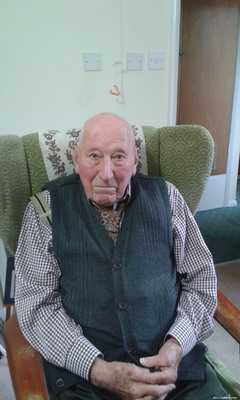 William Bullock was born in Marshfield in Gloucestershire in September 1916 and joined the Royal Air Force as an apprentice in 1932. He was posted to Egypt for training - after serving in the Middle East he joined Bomber Command as an engineer. After serving at RAF East Kirkby, William moved to 106 Squadron at RAF Metheringham before joining Pathfinders at RAF Conningsby, looking after and maintaining 40 Lancasters. William was in charge of moving aircraft around from location to location and tells about his role as a technical adjutant and supplying Merlin engines for the raid on the Tirpitz. He also describes his technical innovations and of his meeting with Guy Gibson. William tells about his post war family and service life, with details on his posting in Sylt, Germany where he saw the extent of bombing damage. He also elaborates on Hugh Trenchard, Michael Beetham, and Arthur Harris.