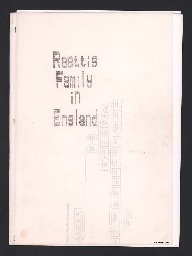 First page biography of Dennis William Raettig with information on other family members. Father was in merchant navy and brothers both served during the war in the navy and air force. Dennis joined Royal Air Force as an engine fitter. Dennis married Joan Wray in 1952 and they had two children. Other documents cover grandfather who was born in Wittenburg Germany 3 February 1864 who became a ships captain. Both his children including Dennis Raettig's father followed in merchant navy. His father served on the Blue Funnel Line in world war one when he was torpedoed. List ships and positions, letters, history of grandfathers dog and a picture of the ship 'Clan Graham'. A letter to Helene and Hertha Rättig in Vienna written in German and a translation sent 7 November 1936 telling history of family in England during world war one and after. A letter from Max Rättig to Alfred Schlingnann talking about his life as a German in England during the First World War and changing his name. Followed by other letters to members of the family in Vienna, and New York and a photographs of the family. Continues with history and biographies of the second, third and forth generations, photographs, letters, list of family and kin and family trees.

Dennis William Raettig
After his general education at the Hull Grammar School Dennis commenced a yearlong course at a commercial college before entering employment in 1936, with M Harland Ltd., Printers, in Manor Street, Hull, in the Estimating Department. Dennis used to travel to work each day from the family home in Anlaby. In September 1939 father, mother Dennis and his two brothers, were together at home when war was declared. Father who as [sic] on leave at the time rejoined his ship. Grandmother came from her home in Hull to stay with in Anlaby. Father’s ship was laid up for repairs near Marseilles and mother together with the two of the officers’ wives went to join their husbands,. During the next few months Max volunteered for Service in the Royal Navy. And brother join [sic] volunteered for the royal [sic] Air Force.
Grandmother died and Dennis had the sad duty to arrange for her funeral.

Dennis joined the RAF and commenced his training as an Engine Fitter at Squiresgate, [sic] near Blackpool. He was billeted in Blackpool and for a short time he was able to meet his brother John who was undertaking his training as a wireless operator.

Dennis was posted to RAF Station Lisset, a bomber station, in East Yorkshire, as an Engine Fitter working on various aircraft, including the :Lancaster.

He married Joan Wray in 1952. They had two children, Susan who was born on May 17, 1953, and Peter who was borne on 16 June 16, 1959. Dennis set up his business as a Printer one of his main jobs was the production of the Jewish Magazine “The Watchman” which he continued with until his retirement in 19**. Both Dennis and Joan were keen gardeners.

My grandfather, Carl Friedrich [underline] Max [/underline] Rättig was born in Wittenberg (East Prussia), on the 3rd. February, 1864, he had a younger sister, Bertha. Their father Edgar died on the 13th. June, 1871, and their mother Luise died in July 1880. Mac, then aged 16, and Bertha aged 13 went to live with their uncle. It was intended that Max should become an architect or surveyor, he however had other ideas and joined the crew of a sailing ship.

His ship often visited the port of Hull where he met his wife to be, Edith Bell. He took up the trade of fisherman, in small open sailing boats. at [sic] first he sailed witha [sic] skipper named Tognola but he soon gained his Skipper’s Certificate and became a very successful trawlerman with a crew of his own. He fished off the Dogger Bank and the Silver Pit, in the North Sea, sometimes staying at sea for three or four weeks.

Both two eldest sons, Max Edgar (my father) and his brother Ralph, intended to follow a life at sea and attended the Trinity House School in order to learn to be sailors. Grandfather insisted that his eldest son should start his career by signing on as apprentice on a sailing ship. So his first ship was the s.s. “Clan Graham”. The ship had been built at Russells shipyard in 1893 and was sister-ship to the “Clan Galbraith”, the last two members of the Dunlop “Clan Line”. Her length was 282.9 feet, beam 40.4 feet, depth below water 24.6 feet, her gross tonnage was 2,200. She sailed under the British flag for 16 years before being sold to a Norwegian company. It was finally sunk by a U-boat in 1917. A framed painting of the ship that father first sailed in is still a treasured family possession of my brother Max. In 1972 I had a photograph of the “Clan Graham” in port, with bare masts, from this, and with reference to the Register of Shipping, I was able to get a young artist, Michael Bonner, to paint for me an impression of the “Clan Graham” in full sail.

Father gained his Master Mariners Certificate by the age of 20 and sailed through World War 1 with the Blue Funnel Line, his ship was torpedoed by a U-boat, he was decorated for his work in convoys during that war. He joined the Anglo-Saxon Petroleum Company, all its tankers were named after sea shells! I list in alphabetical the ships he served in:-

Captain 1935 – 1938, Asia & Australia. Whilst Master of this tanker, Capt. Raettig rescued 8 Formosan seamen who had been shipwrecked for 12 days at sea. He received acknowledgement of his “gallant and kind treatment of these men”, from the Japanese Consul General.

Master. 1944 – 46, I stood on the quayside by Smiths Dock, South Shields, to meet my father for the first time since 1939, I saw father on the ship’s bridge as the ship was manoeuvring alongside; the pilot, who was at the starboard lookout, told me to jump aboard. When I went to see father, who by now was at his desk below, he did not recognise me – I was in R.A.F. uniform. The movement of ships was still under the strictest security, so he was very surprised to learn from me that mother was arriving from Durban to Liverpool the next day. I met her at in Liverpool and brought her back to North Shields, this completed my seven day leave and I returned to R.A.F. West Drayton.

Chief Officer, This was a large corrugated steel plated, motorised oil barge of experimental design. Apparently oil cargo was pumped into the forward tanks and the vessel began to sink by the bows, oil was pumped into the after tanks and the vessel then cracked amidships and sank. Father was dressed in a white tropical uniform, nevertheless he dived overboard and swam ashore!

Master. 1924. During the Depression, father had been ashore for many months waiting to be given a ship. He was approached by an agent and who asked him to deliver a small Coaster the s.s. “Mary” from Hull to Newcastle. Since most of father’s sailing had been in far eastern waters, he asked his father to assemble a crew and to sail with him as first mate. On its way down the River Humber the “Mary” began to take in more water than the pumps could handle. After a brief consultation with his first mate (his father), the Captain turned the ship back and eventually had to beach her at Paull, just a mile or two east of Hull! It was a “coffin” ship.

Master. 1941. this [sic] was a prize passenger ship, captured from the Italians and lying in harbour at Malta. Mother and father had been stranded in Malta at the early part of the war; father’s tanker had broken down with engine trouble. The Navy asked his father to take his crew onto the “Rhodi” with a number of Polish Troops and sail for Egypt. The Navy created a diversion, but the Italian Air Force caught up with the “Rhodi” and sped it on its way with machine-gun and cannon fire. It managed to make its way to Alexandria with no casualties and little damage.

On retirement, he was asked to navigate a trawler. For Skipper Shaugnessy, to a point off Greenland. I drove him to the dock and was troubled to see that all the crew, except the Wireless Operator, were very drunk. By the time they reached their destination all were sober!

After delivering the “Rhodi”, father became manager of an Oil Installation at Ras Gharib, providing fuel for tanks and shipping for the war. Later he was given command of another tanker and supplied fuel for the Burma Campaign.

Father was decorated for his work in World War II. He was one of the six senior masters in the then 100 vessel company and was appointed Commodore.

My brother Dennis found a stray dog which he and I took round to give to our grandfather. It was of uncertain breed, black and brown, medium sized, curly tailed, with an uncertain temper. Bonzo became grandfather’s friend and comrade until he died. On One [sic] occasion we visited him at the Riverside Quay, Hull, on the s.s. “Spero”. The ship was high in the water, having no cargo. There were small waves on the water making the ship bump against the quay. Bonzo was at the top of the steep gangway, crouched down and barking at us, as we climbed up he backed away and dropped down into the water. A ladder was lowered down between the ship and the quay to prevent Bonzo being crushed to death, we got a long boat hook around his collar and hauled him up. Grandfather was in tears at the thought that his faithful friend might have been killed.

We have been asked by H.B.M. * Consul-General to convey to you the gist of the Japanese Consul-General’s letter regarding the rescue of eight Formosans.

The Japanese Consul-General considers the rescue of these men, who had been hovering between life and death for twelve days, a most gallant act and the men themselves state they received most generous and kind treatment on board the tanker “Bulysses”.

For the heroic work and kindness extended to the Japanese fishermen, the Consul-General for Japan expresses his profound appreciation and gratitude.

We are, dear Sir,
Yours faithfully,

For the Asiatic Petroleum Company.

[picture of THE CLAN GRAHAM]