72 items. The collection concerns the wartime service of Leading Aircraftman Dennis William Raettig (b. 1920, 1136657 Royal Air Force). Joining the Royal Air Force reserve in 1941 he trained as a flight mechanic (Engines) before being posted to 104 Squadron (Wellingtons) at RAF Driffield. This squadron number was later changed to 158 Squadron flying Halifax at RAF East Moor, followed by moves to RAF Rufford and Lisset. The collection consists of a memoir, correspondence with family and acquaintances, family history, service and personal documentation, lucky charms,personal items, cap, boots, squadron tie, research on bombing in Hull as well as photographs of air and ground crew and aircraft. It also includes an oral history interview with Joan Raettig (Dennis Raettig's wife).

The collection has been loaned to the IBCC Digital Archive for digitisation by Sue Burn and catalogued by Nigel Huckins. 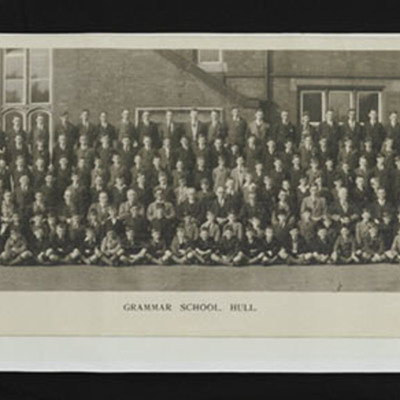 Seven rows of boys with adult staff third row back in the centre. In the background a brick building with windows. Captioned 'Grammar School, Hull'. 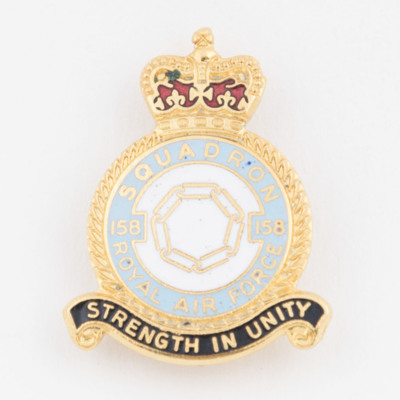 Gold badge with crown and wreath, gold chain ring at centre and motto "Strength in Unity" at bottom on dark blue. 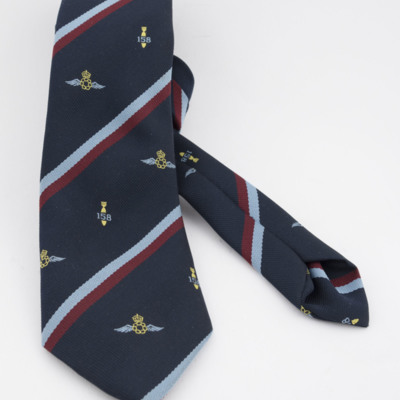 Blue tie with maroon and light blue stripes. Includes number of small motifs of RAF wings and bombs with 158 across. 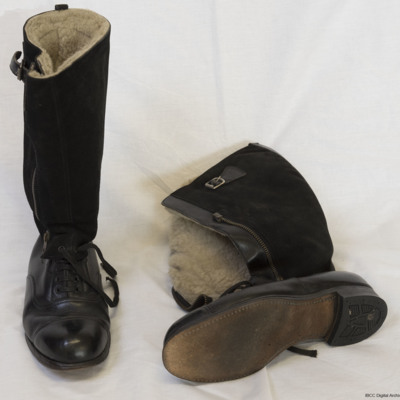 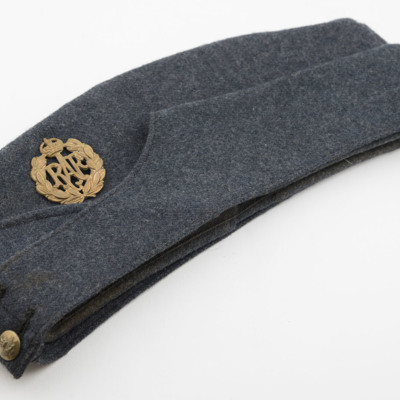 RAF side cap with bronze RAF badge with wreath and crown 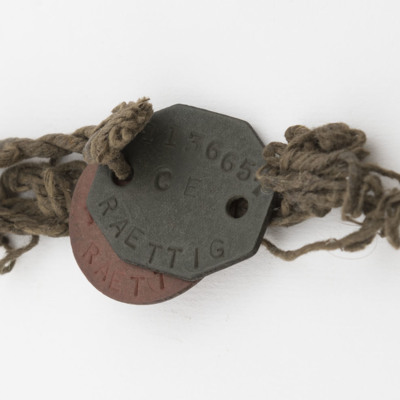 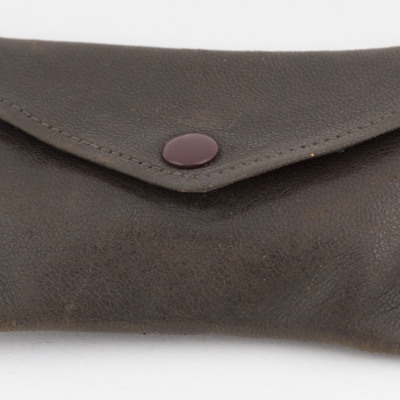 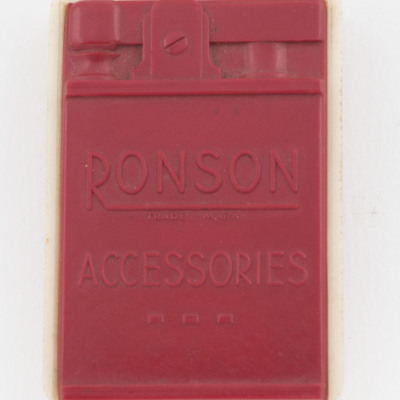 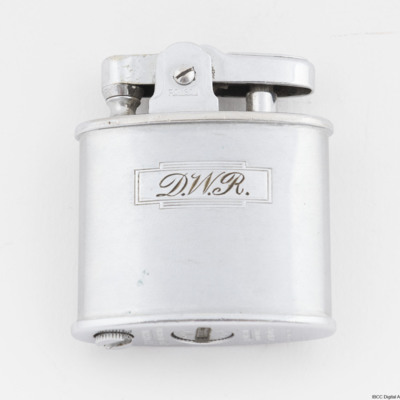 Group of airmen and civilians in front of a Stirling 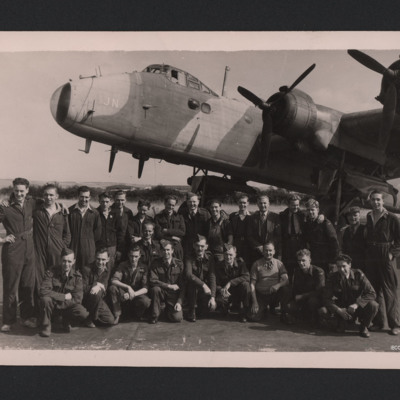 A large group of men in two rows squatting and standing in front of a Stirling Mk 5. Some are wearing uniform or overalls and some are in civilian clothes. The aircraft has letters 'JN' on the nose. 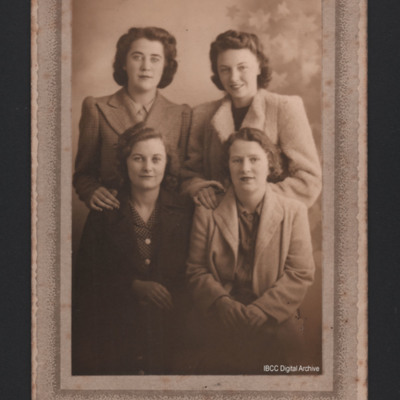 Formal portrait of four women, two sitting in front and two behind. All wearing coats. 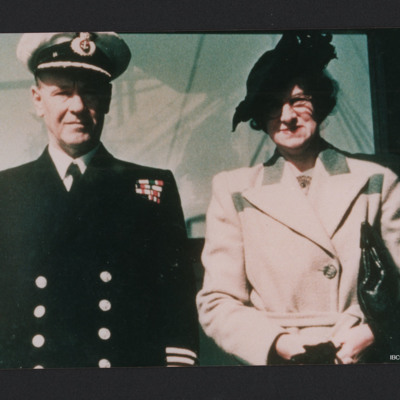 Man wearing merchant navy uniform with medal and white cap standing alongside a women in coat and hat.

Group of boys and men 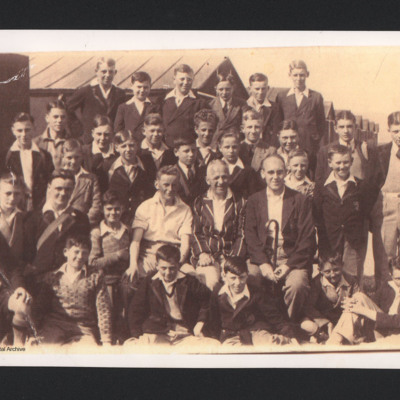 Group of boys and adults sitting and standing in front of a row of huts. 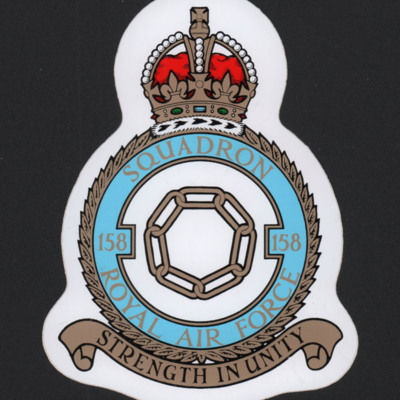 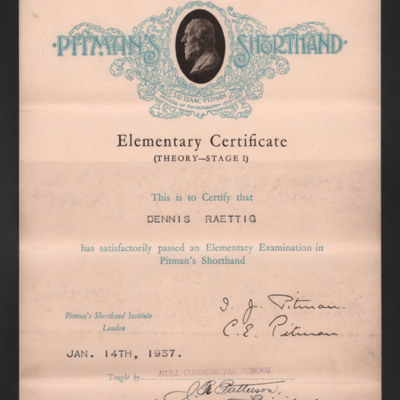 Elementary certificate for Dennis Raettig for examination in Pitman's shorthand. With company letter head and image of founder.

No 102 P.D.C. Cardington notes on pay and allowances 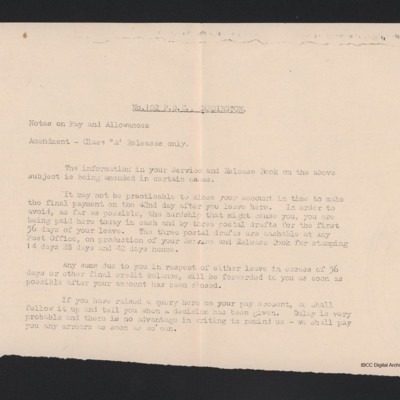 Applies to Class 'A' releases. Applies amendments to information in service and release book in certain circumstances. Covers immediate payment and by three postal drafts during for the first 56 days of leave. Any other pay will be forwarded. 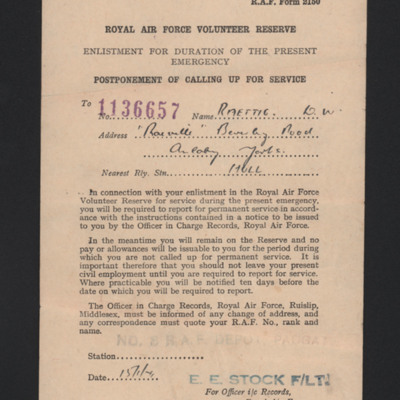 Made out to Raettig D W stating that he will have to report in time when notified. In the meantime he remains on the reserve with no pay. he is required to keep current employment and notify any change of address. 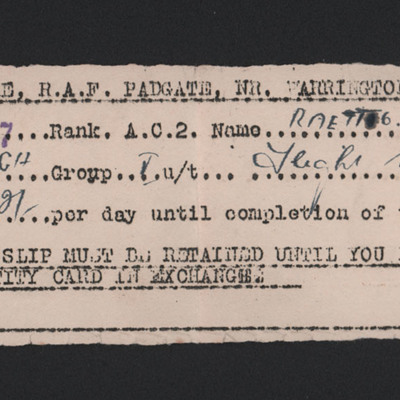 States 1136657 A.C.2. Raettig Dennis William is under training and is due to receive 2 shillings per day. Slip to be retained until he receives a service identity card. 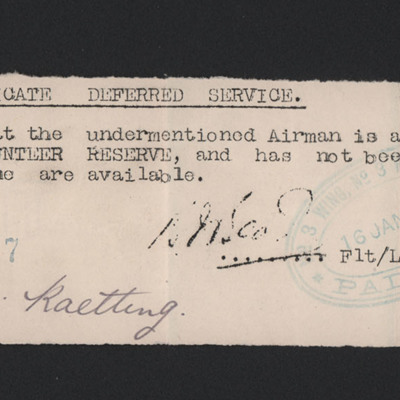 Notes that 1136657 D Raettig is a member of Royal Air Force volunteer reserve but has not been issued a badge as none are available. 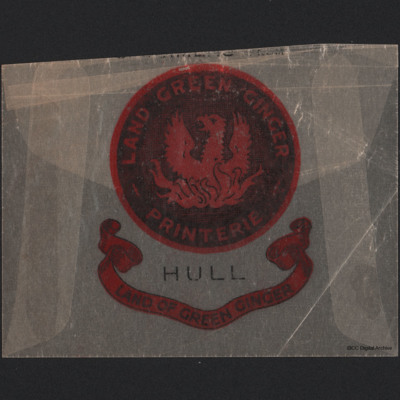 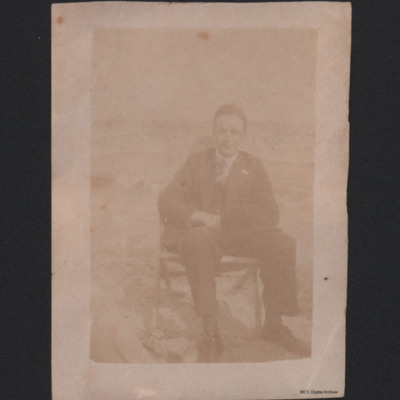 Faint image of man dressed in suit and tie sitting on a chair. 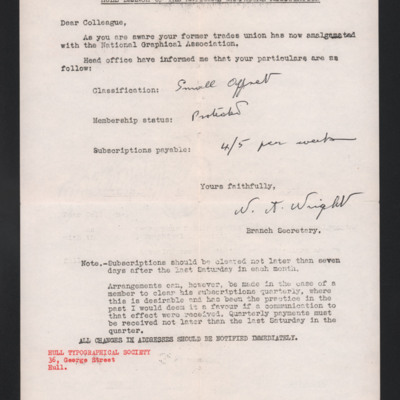 Letter stating that former trade union has now amalgamated with the national graphical association. Continue with particulars of recipient and notes on payment of subscriptions.

Letter to Dennis Raettig from his father 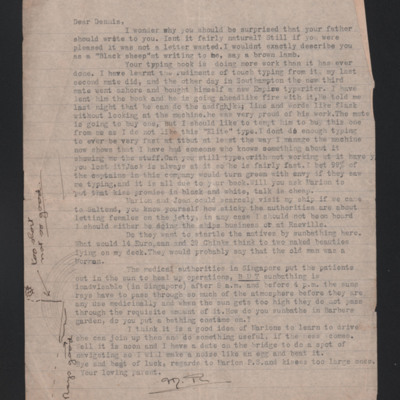 Title 'M.V. Trocas, at sea, 14 June 1939' Chides his son as poor letter writer and comments how useful a typing book is and that crew mates had also got typewriters. He goes on to discuss difficulties of female visiting the ship due to authorities…

Letter to Dennis Raettig from his father 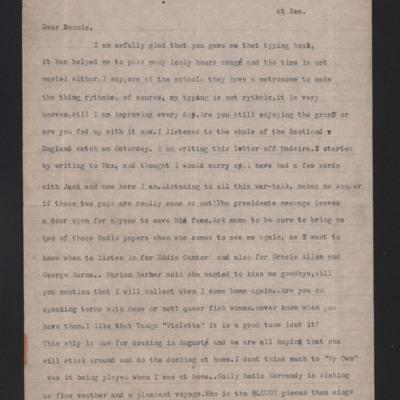 Title 'Trocas at Sea'. Thanks Dennis Raettig for typing book and says how he is getting on with typing. Notes that he listened to Scotland verses England match and he is writing off Madeira. Talks of writing to Jack and of war news he has heard.…

Letter to Dennis Raettig in reply to job application 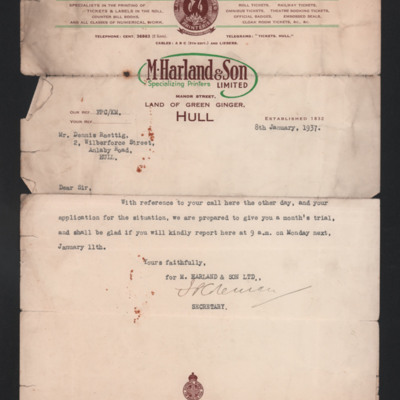