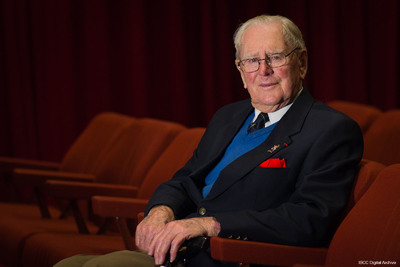 Keith Campbell grew up in New South Wales and joined the Royal Australian Air Force when he was old enough. He flew 35 operations as a bomb aimer with 466 Squadron from RAF Leconfield and RAF Driffield when, on their thirty first operation another aircraft from their squadron collided with them. All other crew were killed but Keith was thrown from the aircraft and parachuted in to a wheat field. He began to walk towards the Swiss border but was caught and became a poisoner of war.He was first sent to Stalag Luft 7 at Bankau but then was ordered on to the Long March and ended up at Stalag 3A at Luckenwalde from where he escaped the Russians and joined up with the Americans who sent him home.