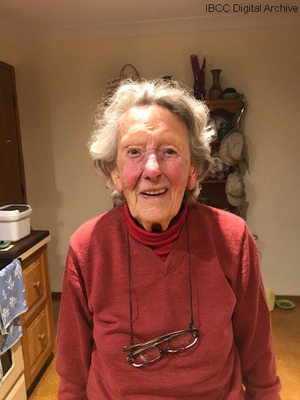 Gillie Street was born in Aglionby, Carlisle, and spent her early childhood in Tyneside before moving back to Cumberland aged eleven. Street recalls attending grammar school in Brampton and her first flying experience on a Barnstormer. Upon leaving school she undertook secretarial training, completed civil service exams, and found employment in London. Met her future-husband there, Morris Gilbert, a navigator of the Royal New Zealand Airforce. Her department was evacuated to Birmingham where she volunteered for the Women’s Auxiliary Air Force following the bleak first winter. After training in London, Street was stationed at RAF Middle Wallop during the Battle of Britain. She describes the shock of the first attack, organising an early lunch for the reoccurring raids, sheltering in the basement, and a close call with a live bomb while surveying damage with the engineering officer. Street recalls being promoted, working with Donald Bennett, and the secretive atmosphere surrounding his involvement with Barnes Wallis. Street also talks about life at RAF High Wycombe and describes observing disagreements regarding the American bombing tactics; having a half-day off on Sundays; and the monthly sherry party where she met her second-husband Freddie, a doctor in the Australian Army. After the war, Street recollects flying on a C-47 over Holland, the Ruhr, Dresden, and Berlin, her reaction upon viewing the devastation, and explains her belief that the Bomber Command operations were justified. Finally, Street talks about her post-war life including marrying Freddie, moving to Australia by boat and living in Sydney, before buying and working on a farm in Orange in the 1960s.