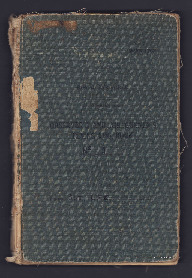 Observer’s and air gunner’s flying log book for J R Lee, flight engineer, covering the period from 15 November 1942 to 15 August 1943 where he was listed as missing and was the only survivor of his crew that crashed in France and became a prisoner of war. Following his repatriation, he returned to flying on 25 February 1946 until 22 November 1949. Detailing his flying training, operations flown, and post war flying duties with 511 Squadron and he carried out 321 flights in the Berlin airlift with 99 Squadron. He was stationed at RAF Scampton, RAF Bottesford, RAF Ossington, RAF Dishforth and RAF Lyneham. Aircraft flown in were Manchester, Lancaster, Oxford, York, Dakota, Anson and Hastings. He flew a total of 24 operations with 467 squadron. Targets were Dusseldorf, Hamburg, Lorient, Cologne, Berlin, Essen, Nurnberg, Duisberg, Pilsen, Dortmund, Friedrichshaven, Spezia, Gelsenkirchen, Genoa and Milan.