23 items. Concerns James Roy Lee (b. 1923, 575842 Royal Air Force). He flew operations as a flight engineer with 467 Squadron until he became a prisoner of war. Collection contains his flying log book, personal and official documents, correspondence, a history of 467 Squadron operations and photographs.

The collection has been loaned to the IBCC Digital Archive for digitisation by Marilyn Palmer and catalogued by Nigel Huckins. 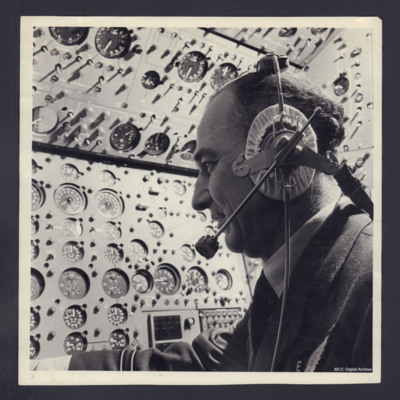 Head and shoulders view of a man with headphones at the fight engineers desk of a Short Belfast. On the reverse 'Flt Lt J R Lee'. 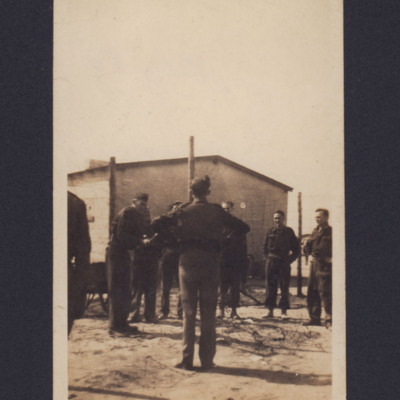 In the centre a man with back to camera addressing a group of men in semicircle in front of him. In the background a single story hut. On the reverse 'Stalag IVB'. 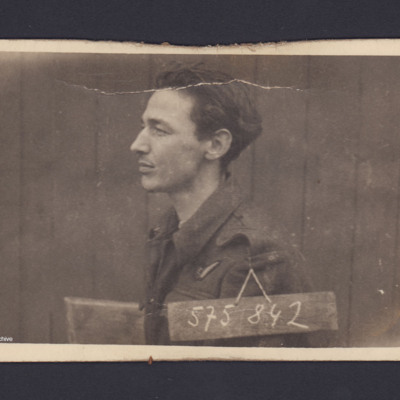 Head and shoulders side view of an airman wearing battledress with flight engineer brevet. He has number board on his left shoulder. Wooden wall in background. On the reverse handwritten addresses. 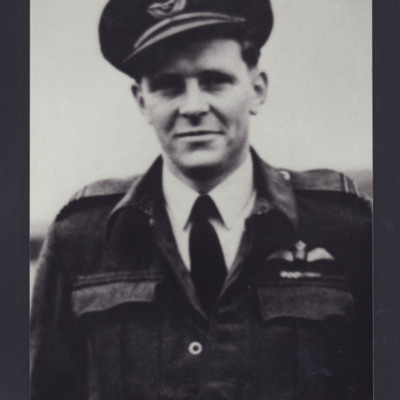 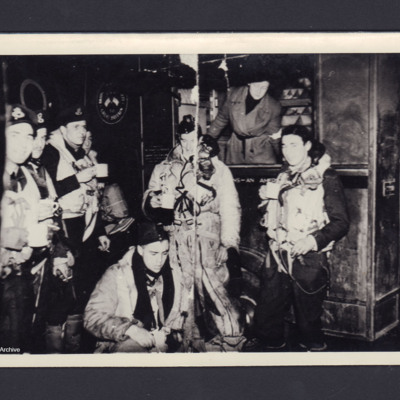 Seven men, six standing and one kneeling down, in front of a van with open serving hatch. 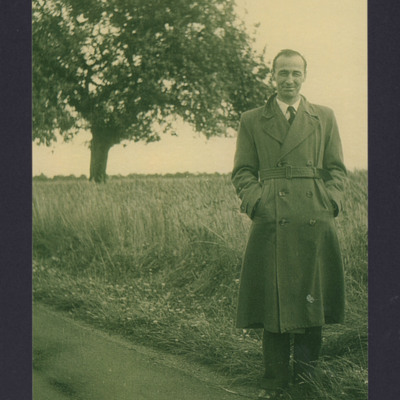 Full length image of a man wearing overcoat with hands in pockets standing on side of a road by filed with a tree. On the reverse 'Field he landed in'. 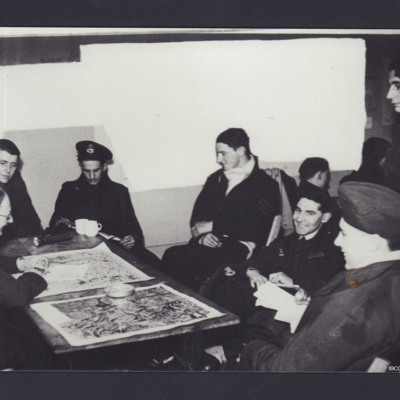 Five aircrew seated and one standing round a table with maps and intelligence officer sitting on left. On the reverse 'F/Sgt Lee standing, L/R S/Ldr Henity interrogating W/C Gomm pilot'. 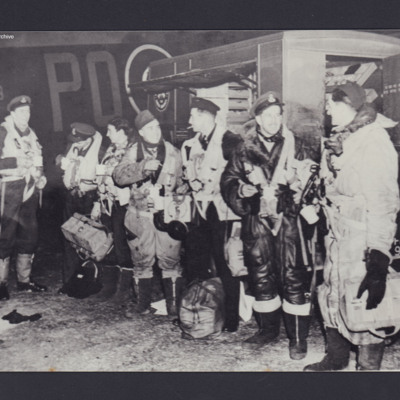 Seven aircrew standing in line in front of a van with open serving hatch and rear door. In the background part of a bomber aircraft, 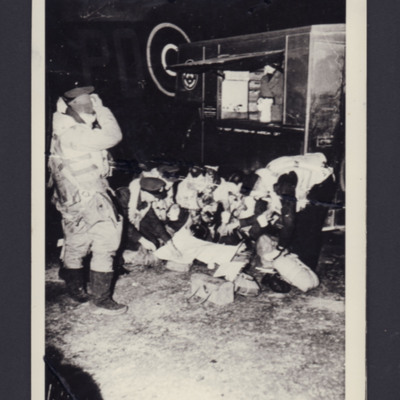 Five aircrew standing in front of a van with serving hatch open. In the background part of a bomber aircraft. On the reverse 'W/C Gomm 2nd from left, F/Sgt Lee 4th from left'. 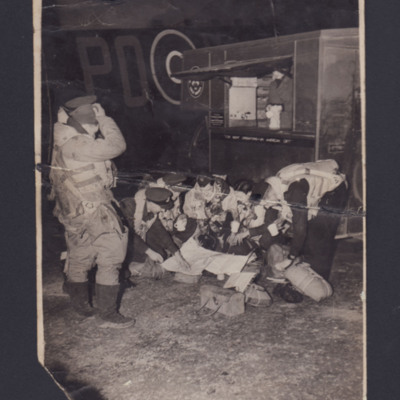 Two men standing on left with several others bending down over parachutes in front of a van with open serving hatch on the right. In the background part of a bomber aircraft. On the reverse 'Issued on behalf of National Y.M.C.A/S'. Two versions. 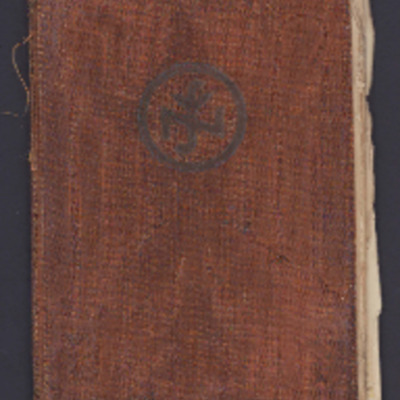 Notebook issued in Berlin in 1933 but used by J R Lee. Contains banknote, German text, handwritten annotations, identity document for a German man, German stamps, English and Scottish addresses, some telephone numbers. At the end a list of James… 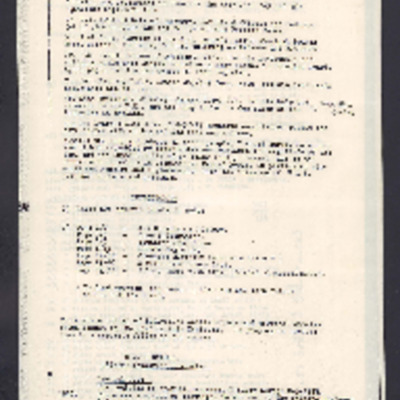 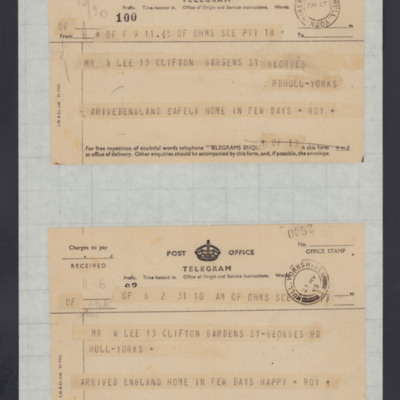 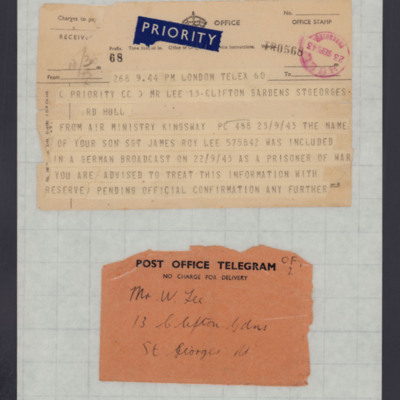 Informs him that his son was a prisoner of war. Announced in German broadcast.

Letter to Mrs A Lee from Officer Commanding 467 Squadron 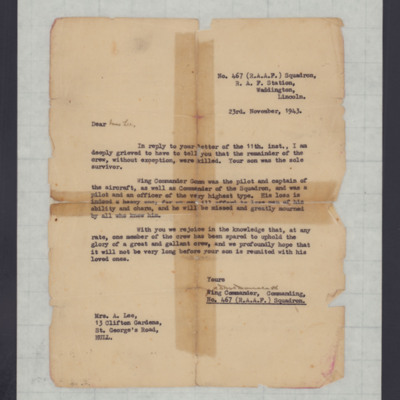 Writes in answer to her letter that the remainder of James Lee's crew were all killed. Mentions Wing Commander Gomm, captain and commander of the squadron. Rejoices that one member was spared and it would not be long before she was reunited with her… 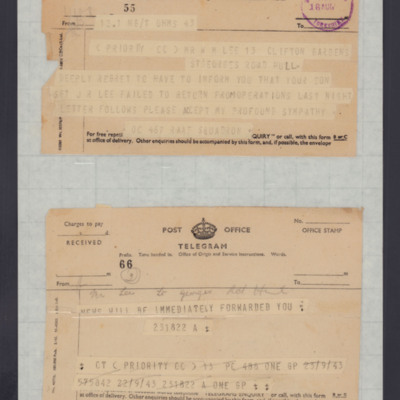 Informs him that his son failed to return from operations. 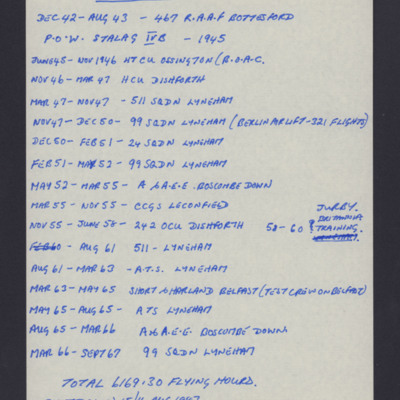 Application for secondment to B.A.O.C 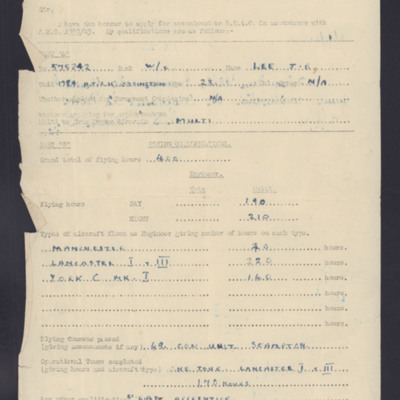 Application made out for W/O Lee J R. Records having flown Lancaster, Manchester and York. Details of education and remarks of squadron commander. Ex RAF apprentice.

Prisoner of war documentation for James Lee with some personal details. Aircraft Lancaster, shot down 15 August 1943. Sent to Stalag IVB. 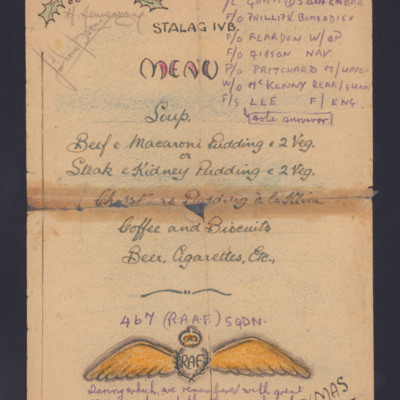 Lists James Lee's crew top right, menu for meal in the centre, at the bottom, pilot's brevet drawing and epitaph for crew. On the reverse many signatures. 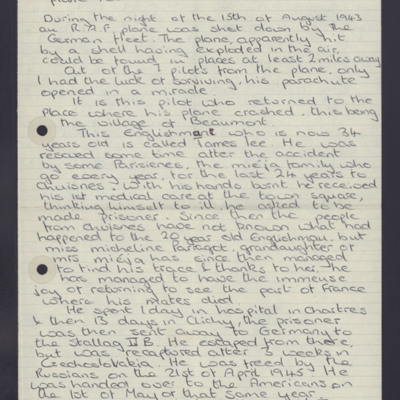 Recalls shooting down of James Lee's aircraft where he was the only survivor. Subsequently rescued by French people and medically treated then became a prisoner of war. Notes he returned to the place and people who rescued him had no idea what had… 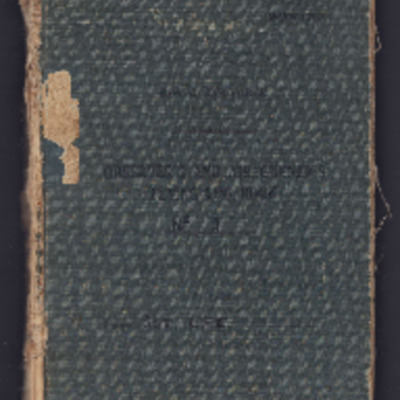 Observer’s and air gunner’s flying log book for J R Lee, flight engineer, covering the period from 15 November 1942 to 15 August 1943 where he was listed as missing and was the only survivor of his crew that crashed in France and became a…
View all 23 items