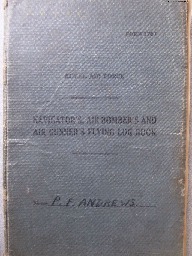 Navigator’s, air bomber’s and air gunner’s flying log book for P F Andrews, wireless operator/air gunner, covering the period from 16 August 1943 to 13 December 1945. Detailing his flying training, operations flown and post war flying. It also gives details of being shot down and baling out over Denmark and landing on Zeeland and becoming a prisoner of war and being liberated by the Americans at Moosburg, Germany. He was stationed at RAF Yatesbury, RAF Barrow, RAF Lossiemouth, RAF Rufforth, RAF Melbourne and RAF Upavon. Aircraft flown in were, Dominie, Proctor, Anson, Wellington, Halifax and Oxford. He flew a total of 19 operations 3 daylight and 16 night-time operations, before being shot down on his 19th operation. Targets were, Essen, Cologne, Gelsenkirchen, Munster, Sterkrade, Duisburg, Hagen, Osnabruck, Bingen, Hannover and Bohlen.

This item was sent to the IBCC Digital Archive already in digital form: no better quality copies are available.