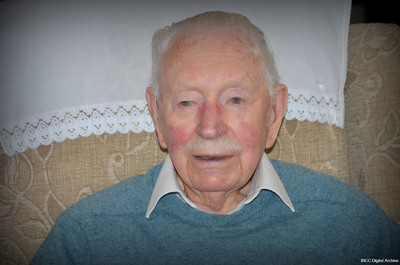 Bill Leckie Bill was born in Glasgow but moved to the countryside as his father suffered from bronchitis. Initially working as a cinema projectionist, Bill joined the Royal Air Force at the age of eighteen, enlisting at St John’s Wood in London as a trainee pilot. Bill undertook basic training at RAF Babbacombe in Devon before being sent overseas to Halifax, Canada. He was then sent onwards to Pensacola for flying training, where his flying training included Stearmans. Bill found aerobatics hard and thought he would prefer flying the flying boats. He flew Catalinas, which he describes as sluggish and slow to respond to control inputs. Bill was then sent back to Harrogate in the United Kingdom waiting for a posting, expecting to be sent to fly flying boats as part of Coastal Command. Instead he was sent to Bomber Command at RAF Little Rissington where he trained on Oxfords before being sent to an operational training unit at RAF Lossiemouth. There he flew Whitleys and Wellingtons. Bill was then posted to 77 Squadron in Harrogate to fly the Halifaxes. With his Scottish crew, he took part in a handful of operations from RAF Elvington and RAF Full Sutton. Later, Bill was flown to Cairo via Gibraltar to join 216 Squadron. Bill was also stationed at Brindisi in Italy, flying the Halifax Mk2 as part of a ‘special duties’ squadron dropping supplies and agents, mainly in the Balkans. He took part in dropping agents sent to recover the Nazi’s looted art works. After the war, Bill returned to his job as a cinema projectionist and then later joined Hoover, working in production. Later, Bill moved to Ireland and flew with the airline Aer Lingus, where he flew several types, including the Douglas DC-3 pilot and Vickers Viscount. Before his retirement, Bill was flying some of the first Boeing 737 jet airliners in Europe, having been trained in the United States.


BL: Quite a long while.
AM: Right.
BL: Because that’s all they had.
AM: Right.
BL: Were DC3s but eventually they got —
AM: Was it a Viscount?
BL: Viscounts.
AM: Right.
BL: Viscounts. That was it. They got the Viscount and then they got the others. What was that called? It was a Dutch plane. F something.
AM: Oh, F-27.
BL: F-27, that’s right.
AM: Yeah.
BL: I knew those so I flew those.
AM: Right. Nice aeroplane.
BL: It was. Yes. And what did I do after that?
AM: Did you not finish on the Boeing?
BL: I might. I finished on the Boeing at Aer Lingus. Yes.
AM: Right. So, it was the first —
BL: When I went to Aer Lingus that was the last employer I had.
AM: Right. And what, was the Boeing 737 the first jet aeroplane you flew?
BL: I would say so. Yes.
AM: I think that’s fantastic.
BL: Yes. I went to the States to convert on to it.
AM: Right.
BL: Yeah. Yeah. So it was, in fact it was the first 737 to be flying in Europe. So it was.
AM: Right.
BL: At that time.
AM: Right. So that’s quite an accolade to go over and pick up the first 737.
BL: Yeah.
AM: And when you retired you were on the Boeing 737.
BL: Yes.
AM: Right.
BL: Yes. I never left them. Oh, well I did actually. I flew the 70, 720 for a while. I did, oh I spent the best part of a year I think, six months or a year as a navigator. They were short of navigators.
AM: Gosh.
BL: At one period when they were flying the Atlantic and they were using the 720 I think it was. And I flew in that as the navigator. Didn’t fly as a pilot.
AM: Right.
BL: I was a navigator because I had my navigator’s licence.
AM: Right.
BL: And then when I finished that section I got moved into the pilot’s seat. The co-pilot, and just continued from there and eventually moved over in to the captain’s seat.
AM: Right.
BL: Finished my time as a captain. I wish in a way you know it was all down in writing and not up here.
AM: Exactly. Yeah. Yeah.
BL: Because I can’t remember.
AM: Yeah.
BL: I can’t remember now an awful lot. My memory is actually worse now than it used to be.
AM: Bill, it’s a remarkable story and it’s been a great pleasure listening to you, and meeting you and hearing the story of your life.
BL: I’ve been [pause] It’s been an enjoyable life.
AM: Yeah.
BL: I’ve been lucky. Very lucky, with all the different places I went to. Were able to fly from.
AM: Yeah.
BL: With different aircraft.
AM: And flown some lovely aeroplanes. Bill, thank you. I’ll switch that off now.