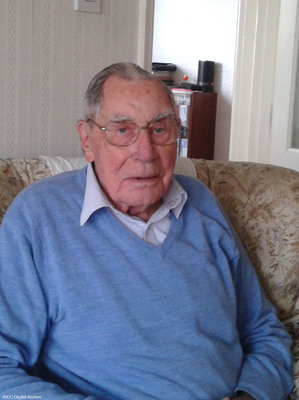 John Robert Watson joined RAF Bomber Command in 1943, volunteering after he witnessed his next-door neighbour's house being destroyed by a bomb. Against his father's wishes, John joined Bomber Command initially as a wireless operator, before transferring to a flight engineer course. Travelling to RAF Ouston, John flew in Lancasters and Halifaxes. His first operation took place on the 17th of January 1944, which he believed he would not survive. His second operation was to Berlin and featured another close call, in which he almost crashed into another Lancaster. He remembers his crew fondly, stating that they did well throughout the war because they trusted one another so much. Joining the Pathfinders force, John travelled from RAF Wickenby to RAF Warboys, changing crews and being put through extra training. Completing over 40 operations John recalls several operations, including one over Nuremberg which featured another close call. John was then moved again and became a flight instructor for Wellingtons. He also gives information regarding his crew, being a flight instructor, his scariest moment whilst flying, the impact of lack of morale fibre, and master bombers' role. He also gives several humorous stories of his time at RAF stations and his run-ins with higher-ranking service members. During his service as a Pathfinder, John received the Distinguished Flying Medal, the Legion of Honour and the Pathfinder badge. When he was demobilized, he became disillusioned with discipline within the RAF and continued his apprenticeship, meeting and marrying his wife in 1956 and living with her until she passed away in 2013.