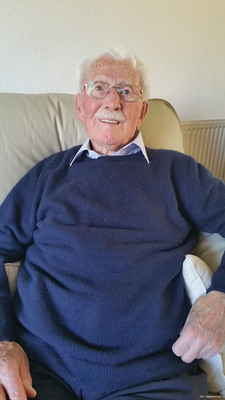 Charles McNally spent his childhood in Dundee and Airdrie, Scotland. He began work at the Post Office as a Telegram Boy before joining the engineering department. This meant he now worked in a Reserved Occupation and he struggled to get permission to volunteer for the RAF. He eventually secured his release but had an unusual route to securing his posting. He began training as an observer radio. He then went on to train as a pilot. He eventually became a flight engineer and was posted to 101 Squadron at RAF Ludford Magna dealing with electronic counter measures. Charles married while he was still on operational flying. On honeymoon he was walking through the village with his new wife when he was collected for an operation that night and effectively left his wife at the roadside not knowing if she would soon be a widow.