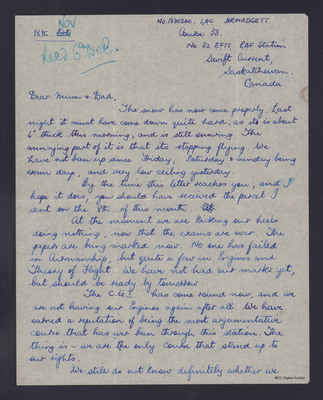 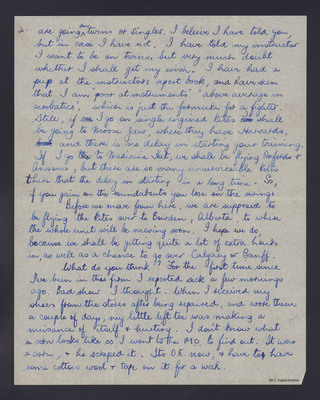 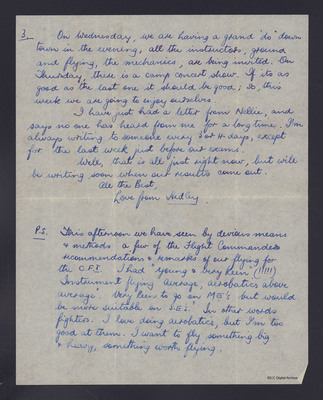 Written from Swift Current. Writes that snow has prevented flying and they have little to do as examinations are over but some people have failed them. Mentions that the C.G.I relented on the resit of the engines examination. Discusses future course possibilities on either twins or singles and considers that his reports suggest he would be suitable for fighters and would go to Moose Jaw on Harvard. Mentions problems with serviceability of Oxfords if he goes to Medicine Hat on twins. Talks of potential move of 32 EFTS to Bowden Alberta and problems with his feet. Concludes with entertainment news. Postscript covers his report from the C.F.I, which suggest fighters but he would prefer heavies.

Dear Mum & Dad,
The snow has now come properly. Last night it must have come down quite hard, as it is about 6” thick this morning, and is still snowing. The annoying part of it that its stopping flying. We have not been up since Friday, Saturday & Sunday being exam days, and very low ceiling yesterday.
By the time this letter reaches you, and I hope it does, you should have received the parcel I sent on the 8th. of this month. [deleted] At [/deleted]
At the moment we are kicking our heels doing nothing, now that the exams are over. The papers are being marked now. No one has failed in Airmanship, but quite a few in Engines and Theory of Flight. We have not had our marks yet, but should be ready by tomorrow.
The C.G.I. has come round now, and we are not having our Engines again after all. We have earned a reputation of being the most argumentative course that has ever been through this station. The thing is – we are the only course that stand up to our rights.
We still do not know definitely whether we
[page break]
2. are going [inserted] on [/inserted] twins or singles. I beleive [sic] I have told you, but in case I have not, I have told my instructor I want to be on twins, but very much doubt whether I shall get my wish. I have had a peep at the instructors report book, and have seen that I am “poor at instruments” “above average in aerobatics”, which is just the formula for a fighter. Still, if [deleted] we [/deleted] I go on single engine kites [deleted] we [/deleted] I shall be going to Moose Jaw, where they have Harvards, [deleted] but [/deleted] and there is no delay in starting you’re your training. If I go [deleted] the [/deleted] to Medicine Hat, we shall be flying Oxfords & Ansons, but there are so many unserviceable kites there that the delay in starting is a long time. So, if you gain on the roundabouts you lose on the swings.
Before we move from here, we are supposed to be flying the kites over to Barden, Alberta, to where the whole unit will be moving soon. I hope we do, because we shall be getting quite a lot of extra hours in, as well as a chance to go over Calgary or Banff.
What do you think? For the first time since I’ve been in this firm I reported sick a few mornings ago. Bad show I thought. When I received my shoes from the stores after being repaired, and wore them a couple of days, my little left toe was making a nuisance of itself & hurting. I don’t know what a corn looks like so I went to the M.O. to find out. it was a corn, & he scraped it. Its O.K. now, & have to have some cotton wool & tape on it for a week.
[page break]
[underlined] 3. [/underlined] On Wednesday, we are having a grand “do” down town in the evening; all the instructors, ground and flying, the mechanics, are being invited. On Thursday, there is a camp concert show. If its as good as the last one it should be good; so, this week we are going to enjoy ourselves.
I have just had a letter from Nellie, and says no one has heard from me for a long time. I’m always writing to someone every 3 or 4 days, except for the last week just before our exams.
Well, that is all just right now, but will be writing soon when our results come out.
All the Best,
Love from [underlined] Hedley [/underlined].

[underlined] P.S. [/underlined] This afternoon we have seen by devious means & methods a few of the Flight Commanders recommendations & remarks of our flying for the C.F.I. I had “young & very keen” (!!!!!) Instrument flying Average, Aerobatics above average”. Very keen to go on M.E.’s but would be more suitable on S.E’s.” In other words fighters. I love doing aerobatics, but I’m too good at them. I want to fly something big & heavy, something worth flying.
[page break]
[BY AIR MAIL PAR AVION Stamp] [postage stamps][postmarks]
Mr. & Mrs. L.R. Madgett.
127. Longlands Road,
Sidcup.
[underlined] Kent. [/underlined]
[underlined] ENGLAND [/underlined]
[page break]
[GREETINGS Stamp [indecipherable words]]