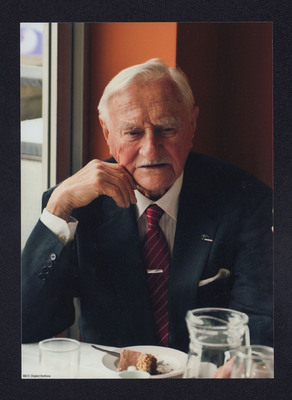 Andrzej Jeziorski was born in Poland and, when war broke out, fled to Britain, where he flew as a pilot with 304 Squadron. Remembers the 1st of September 1939. Talks about his father, a Navy officer who served in the First World War. Mentions his first contact with the Air Force when he and his family moved to Deblin. Tells of his escape from Poland to France, his further education there and his evacuation to Britain. Initially, he was posted to Scotland and trained to join the 16th Tank Brigade. He then decided to transfer to the Air Force and in 1942 started training as a pilot. Was posted to 304 Squadron on various stations. Tells of his career in civilian aviation after the war: operating flights for Skyways and Britannia all over the world, until his retirement in 1982. Talks about his life in Britain during the war and mentions various episodes: being taught English by university lecturers and socialising with them. Tells of being assigned with going on patrols, locating and attacking enemy submarines. Expresses his views on Poland’s situation after the war. Talks about the Polish Air Force Association in Britain, his involvement in it and the memorials to Polish aircrews.