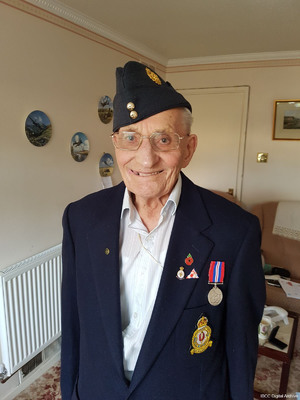 Harry Hodgson was ground crew during the war. He was based with 10 Squadron, working on Halifax Bombers at RAF Melbourne. Harry said it was a very busy time patching up the holes from both anti-aircraft fire and bullets on the Halifax. He remembers having to work in freezing conditions when the planes were on the dispersal points getting them ready to fly again. It was after around 3 operations the aircraft would be taken into the hangar for a more thorough overhaul. Harry was also on the receiving end of German fire when the airfield and local roads were strafed by German fighters that had followed the 10 Squadron Halifax Bombers back to base. Harry was a sign writer before he joined up and due to this was asked by several of the crews to paint the nose art on their aircraft.