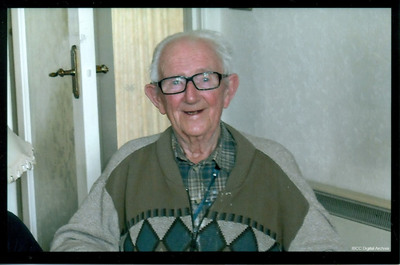 Eddie Edmunds was born in Walthamstow and was educated at a grammar school, then joined an oil company. He eventually moved to the Electric Supply Company and became an accountant. Eddie had always wanted to fly so he initially joined the reserve and then the Royal Air Force as an air gunner for about a year. He then went to Canada to train as a pilot and was eventually posted to 106 Squadron under Guy Gibson, whom he quoted as being ‘a fantastic pilot, disciplined and looked after people’. Eddie carried out 30 operations.
He recalled an incident when they had been low on petrol and had to descend in a storm, the starboard engine on fire. The navigator bailed out, was caught up but the engineer released him with a knife and both came down safely.
In April 1943 his aircraft was attacked over Duisburg in the moonlight - he could see everything but landed safely. Eddie had done about 800 hours on Wellingtons but his preferred aircraft was the Lancaster. Eddie then got posted as an instructor and flew Oxfords and Mosquitos. He was awarded the Distinguished Flying Cross.