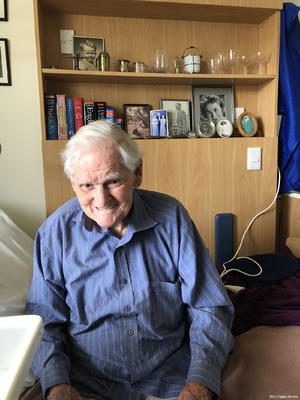 Douglas Smith grew up in New Zealand and on leaving school he joined the Post Office. He joined the Air Force and he flew Tiger Moth, and Gypsy Moth aircraft at New Plymouth. On one of his flights there was a warning note in the cockpit not to do aerobatics. He slow rolled the aircraft and was covered in hot oil from the engine and was advised by the chief flying instructor, that he would soon get his chance later on to do aerobatics. He was posted to Ohakea flying twin-engined Oxfords. He arrived in the UK to commence training and was posted to RAF Upwood, an OTU flying Blenheims. He completed thirty operations. Whilst flying in Transport Command in India, he was carrying former prisoners of war from Delhi to Calcutta and his undercarriage developed a fault so he flew around the area to burn off fuel, and he crash landed the aeroplane, with no injuries to his crew or passengers. He was given a green endorsement in his flying log book.