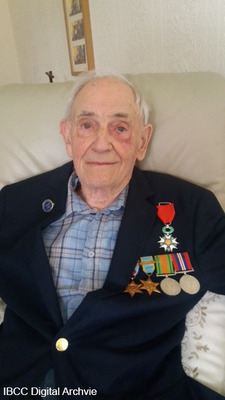 Ken Beard served as a rear gunner during the Second World War. He has been a member of The Salvation Army all his life and his faith played a huge role in helping him through the horrors of war. Awarded a scholarship at Retford Grammar School, he left it with the benefit of a first class education. He had several jobs before enrolling in the Royal Air Force. He was visiting Sheffield and upon seeing the recruitment office, walked in and enlisted. It took him several days to pluck up the courage to inform his mother what he had done. After enrolling, he was soon selected for a commission. Air gunnery training at RAF Bridlington followed, before being posted to RAF Melbourne where he served the majority of his Air Force career as a rear gunner on Halifax aircraft. He flew 31 operations, including seven to Berlin. He describes approaching Berlin at 30,000ft and being lit up by searchlights. He recalls only once being hit with anti-aircraft fire, when they received slight damage. At no time was his aircraft attacked directly by Luftwaffe fighters. On D-Day, Ken and his crew set off on an operation at 02:30 and were surprised to see the English Channel covered in a vast armada of vessels of all sizes. Nothing had been mentioned to them at the briefing before take-off. On his return to civilian life, Ken became a probation officer in the Worksop area. In November 2015, Ken attended a ceremony at Retford Town Hall where he was one of three recipients of Legion D’ Honneur.