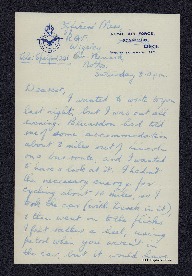 He writes of life at RAF Wigsley and colleagues mentioned in the Birthday Honours List.

[Royal Air Force crest]
[deleted] ROYAL AIR FORCE,
SCAMPTON,
LINCS. [/deleted]
‘PHONE: SCAMPTON 226.
Officers’ Mess,
R.A.F.
Wigsley
Nr. Newark,
Notts.
[underlined] Tele: Spalford 241 [/underlined]
Saturday 8.0 p.m.
Dearest,
I wanted to write to you last night, but I was out all evening. Blunsdon had told me of some accommodation about 3 miles out of Lincoln on a bus route, and I wanted to have a look at it. I hadn’t the necessary energy for cycling about 10 miles, so I took the car (with Derek in it), & then went on to the flicks. I felt rather a heel, using petrol when you weren’t in the car, but it would have
[page break]
2.
been an awfully long way to cycle, and anyway, it was in a good cause. As it happened, the woman had got somebody in at the beginning of this week.
Blunsdon’s navigator told me of a nurse in the same village. She wants a woman to share the house with her, - I rather fancy as a sort of housekeeper, - but he is making enquiries to see if it would suit us.
I was going to have another try at Saxilby or some other village tonight, but decided to wait till tomorrow, & write to you tonight. A couple of blokes
[page break]
3.
are going out to local pubs, & I’ve asked them to see if they can discover anything.
Tomorrow night I’ll have another look, myself. I also want to find someone to do my washing, as the laundry here – like most other things connected with comfort – is badly organised. We couldn’t send any last week-end, & now, apparently, the laundry may go any time in the next 7 days – nobody knows when - & will come back probably a fortnight later. How the airmen manage I cannot imagine, but I think
[page break]
4
it's a shocking system. It’s typical of a lot of things on this camp, however.
We have lectures fairly solidly, starting with an 8.30 parade, & finishing at 4.30 p.m. I, with several others, however, happen to have been chosen (by chance not by merit!) for training in the use of some special equipment, so that will probably mean working late some nights. Actually, there’s quite a lot to learn without that, as the Stirling is a very complicated aircraft, unnecessarily so, I think. I hope to have my first trip on
[page break]
5
Monday, all being well. I’ve been given a flight engineer – he’s called Jones, - but I haven’t been able to see him yet.
We had a rather amusing interlude yesterday afternoon. The C.G.I. told us that we were wanted for a couple of funerals (a crew was killed this week) & we all rushed up to see the Training Wing Adj. to try & pick a funeral that would give us the best holiday. Derek managed to be nominated for Harrogate, but they wouldn’t take F/Lts, unfortunately.
I was studying the Birthday Honours List on Thursday, & among the A.F.C.s
[page break]
6
are F/Lt. A.A. Smith, & F/Lt. P.W. Percy. The initials are the right ones so I don’t think there’s any mistake, but it makes me feel cheesed, [deleted] jus [/deleted] wouldn’t you be?
I met a Cark Wireless Op in Lincoln last week. He says there has been a big clean up there, & practically all the old gang have been posted to Ops now.
One of the instructors here was a pupil in B flight at Ossington, [deleted] May [/deleted] [inserted] March [/inserted] 43. He is now a D.F.C.!
Interruption form Derek! He thinks it would be a good idea if you came up here, because you could then do his laundry! I told him I
[page break]
7
wouldn't dream of such a thing, & he said he was sure you’d be delighted to do it for him! It’s just as well he won’t get the chance to ask, or he might get an unpleasant surprise.
I don’t think I’ve had a letter from you since Monday & it gives me the feeling that I’m sailing uncharted seas, if you understand what I mean. I feel all alone unless I am in constant contact with you.
Aren’t you glad I’m not in the army now? They must be having a hell of a time in France, now, & they haven’t met the real German
[page break]
[missing page]