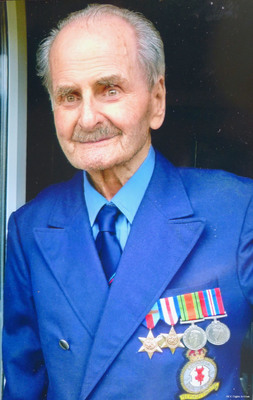 Les Loosemore describes his upbringing and employment history in Swansea before joining the war in 1945. He describes the Blitz in Swansea before training to be a mid upper gunner for 61 Squadron. He describes his rather intensive training, including his time at the Lancaster Finishing School, the crewing up process, the importance of maintaining equipment and the various aircraft he flew, including Ansons, Wellingtons and Lancasters. He articulates the atmosphere onboard an aircraft during an operation, recalling the silence as everyone concentrated on their own duties and the fear he felt on his first few operations. He recalls watching the aircraft next to him dropping a Tallboy (or Grand Slam) bomb, before likening the noise of a operation to that of heavy thunder. He flew operations for three months before the war ended, at which point the mid upper gunners were no longer needed. He retrained as a driver although missed saying goodbye to his crew.