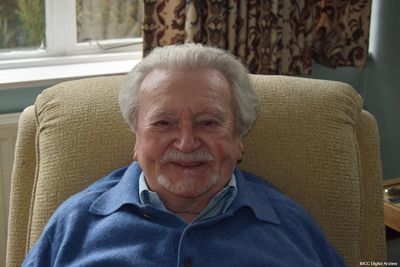 AS: I think that one of the problems in London is that properties have become so valuable that they cease to becomes, they’re very much investment opportunities.
FL: Yes. Oh with Sanctuary I then as I say I became vice-chairman of the central council and by then I’d been with Sanctuary about ten years, eight, ten years and they wanted to persuade me to take on the duties of the chairman which I refused, but I did accept the duties of the chairman of the special projects committee, and that was the most gratifying committee that I found. And today Sanctuary is the largest Housing Association in the country and also I’m pleased to say that they are doing a lot of care facilities for people and in a nice good way, and also a lot of, um, they started letting people buy some of their houses but I don’t think they were enthusiastic about it, which I didn’t push, but ultimately of course I was getting on a bit and decided when I was seventy-nine that I’d had enough and I discussed with the chief executive and the treasurer, two very good friends of mine by then, that I was going to retire. They regretted it but understood, and I graciously after persuasion by some of the members of the committee I understand gave me a crate of my favourite red wine when I retired, which I so enjoyed, and I did leave Sanctuary regrettably but I think it was inevitable, and I’m pleased to say that as time as gone by, I’m still in touch because I’m still a member and still life president although that role is a non-entity really, but unfortunately most of the council members are now paid. The chief executive and treasurer have got salaries that I think are higher that the Prime Minister’s but that is I’m afraid life now that people are paid these monies in order to, the organisation to attract the most skilled people they’ve got lawyers, managers, what have you on their committees, so that they are in fact as I say the most financially balanced housing association in the country but, and the chief executive I understand recently awarded a CBE,. which in the past being slightly socialistic he wasn’t inclined to want, but I think the grade of CBE I think attracted him a little bit more than an M or an O and I think that, that I believe changed his mind. I’m still in touch with David and treasurer, not very much, I occasionally get acquainted with their activities but I’m gradually receding into the background, I’m still filling in an annual little return about what activities that are going on and what I think of them and the people that are on the central council which I’ve got no jurisdiction over at all so it’s just a question of fill the paper in and sign it I do that annually. They used to send me a catalogue, a diary at one time, but they don’t anymore which I regret very much because it was a damn good one. [laughs] But there you are it’s closing down at the age now of ninety-four given up most of my activities when I was eighty, I regret to say that when I retired from the Epping Forest District Council, having been disgustingly fit most of my life I then bumped up against one or two health problems which am fortunate enough to have skilled doctors, and skilled practitioners, specialists in our local hospital whom I became very friendly with and they were very, very accommodating, and I have been cured of most of those activities the only thing that I do now is take quite a number of pills and I never walk fast these days in case I rattle. [laughs]
AS: Thank you very much Freddie I’m very grateful for the opportunity to hear your story.