Interview with Gordon Mellor. One 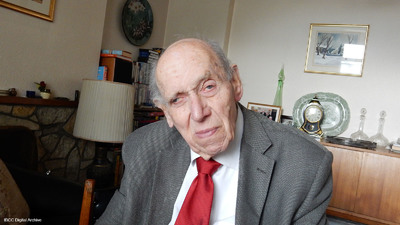 Interview with Gordon Mellor. One

Gordon Mellor grew up in London and was interested in aviation. He volunteered for the Air Force and trained as a navigator in Canada. On his return to the UK he and his crew were posted to 103 Squadron. Returning from an operation they were attacked by a night fighter and shot down. Gordon baled out and landed in a tree. When he freed himself and landed on the ground, he set off to walk and by tracking the North Star, set off towards the general direction of Spain. He hid in a number of places during the daylight until after a few days he was inspired to knock on a door. He found he was in Belgium with friendly people who started the process that would lead to him being escorted through an escape line from Belgium to Paris and eventually home.