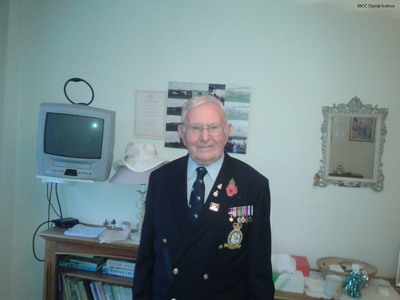 Laurie Davis trained as a wireless operator and first went to RAF Silverstone where crews were formed. Because of his bright red hair, he was then known as ‘Red’. The crew worked on Wellingtons for a few weeks and then Stirlings at RAF Syerston. They then went on to Lancasters and to conversion and finished going on to 619 Squadron based at RAF Strubby in Lincolnshire. Their first operation was on Dresden, the next operation was to an oil refinery just outside Hamburg. At least three aircraft got caught in the searchlights, were hit by the barrage and exploded into a ball. The crew did twelve operations together. Towards the end of 1945 they flew out to India with 9 Squadron as part of the Tiger Force; with 617 Squadron (RAF Waddington) he took part in operations Dodge and Exodus. Laurie was posted to RAF Woodbridge in Suffolk as a warrant officer. After about six months he was posted in Germany. He then toured round with the RAF team for football and cricket, winning the British Forces Inter-Services football match at Cologne stadium. Since leaving Germany in November 1947 he has kept in touch with various groups and has done six marches at the Cenotaph on Armistice Day. He meets up with the squadron every October when they laid a wreath.