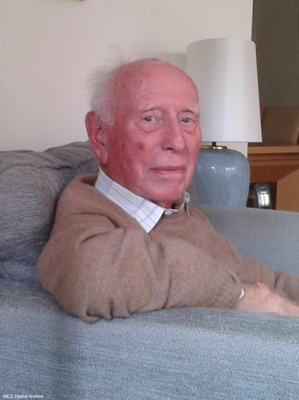 John De Hoop was evacuated to Sussex at the start of the war but returned to London in early 1940. He joined the Home Guard before joining the Air Training Corps and went to radio school in Yatesbury in Wiltshire where he experienced flying in a Dominie. When he was nineteen, he was trained on Wellington Bombers before moving on to a Heavy Conversion Unit flying Stirlings. He went to Lancaster Finishing School, before doing minelaying trips. Later on, he was posted to an RAF station as an adjutant.