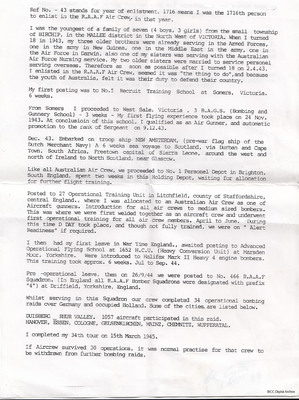 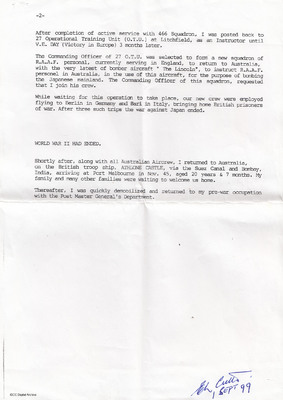 Two typewritten pages detailing the life of Ernest Cutts. He was the youngest of seven children, born in NW Victoria, Australia. He enlisted as aircrew on his 18th birthday and was posted to No 1 Recruit Training School in Victoria. Next he went to RAAF West Sale to learn air gunnery. On completion of this in December 1943 he sailed to Scotland.Then he transferred to 27 Operational Training Unit at Lichfield after which 1652 Heavy Conversion Unit, Marston Moor. Operationally he served with 466 squadron at Driffield. He completed 34 operations by 15th March 1945. He was then posted to 27 Operational Training Unit at Lichfield as an instructor. Whilst waiting a transfer to Australia he did three trips as part of Operation Dodge bringing prisoners of war back to Britain. On demobilisation in Australia he returned to work at the Post Master General's department.

I was the youngest of a family of seven (4 boys, 3 girls) from the small township
of BIRCHIP, in the MALLEE district in the North West of VICTORIA. When I turned
18 in 1943, my three older brothers were already serving in the Armed Forces,
one in the army in New Guinea, one in the Middle East in the army one in
the Air Force in Darwin, also one of my sisters was serving with the Australian
Air Force Nursing service. My two older sisters were married to service personel
serving overseas. Therefore as soon as possible after I turned 18 on 2.4.43,
I enlisted in the R.A.A.F Air Crew, seemed it was “the thing to do”, and because
The youth of Australia, felt it was their duty to defend their country.

My first posting was to No.1 Recruit Training School at Somers, Victoria.
6 weeks.

From Somers I proceeded to West Sale, Victoria , 3 B.A.G.S. (Bombing and
Gunnery School) – 3 weeks – My first flying experience took place on 24 Nov.
1943. At conclusion of this school, I qualified as an Air Gunner, and automatic
promotion to the rank of Sergeant on 9.12.43.

Dec. 43. Embarked on troop ship NEW AMSTERDAM, (pre-war flag ship of the
Dutch Merchant Navy) A 6 week sea voyage to Scotland, via Durban and Cape
Town, South Africa, Freetown capital of Sierra Leone, around the west and
north of Ireland to North Scotland, near Glasgow.

Like all Australian Air Crew, we proceeded to No.1 Personel Depot in Brighton,
South England, spent two weeks in this Holding Depot, waiting for allocation
for further flight training.

Posted to 27 Operational Training Unit in Litchfield, county of Staffordshire,
central England., where I was allocated to an Australian Air Crew as one of
Aircraft gunners. Introduction for all air crews to medium sized bombers.
This was where we were first welded together as an aircraft crew and underwent
first operational training for all air crew members. April to June. During
this time D DAY took place, and though not fully trained, we were on “ Alert
Readiness” if required.

Pre –operational leave, then on 26/9/44 we were posted to No. 466 R.A.A.F
Squadron. (In England all R.A.A.F Bomber Squadrons were designated with prefix
“4”) at Driffield, Yorkshire, England.

Whilst serving in this Squadron our crew completed 34 operational bombing
raids over Germany and occupied Holland. Some of the cities are listed below.
DUISBERG _ RHUR VALLEY. 1057 aircraft participated in this raid.
HANOVER, ESSEN, COLOGNE, GELSENKIRCHEN, MAINZ, CHEMNITZ, WAPPERATAL.

If Aircrew survived 30 operations, it was normal practise for that crew to
be withdrawn from further bombing raids.

After completion of active service with 466 Squadron, I was posted back to
27 Operational Training Unit (O.T.U.) at Litchfield, as an instructor until
V.E. DAY (Victory in Europe) 3 months later.

The Commanding Officer of 27 O.T.U. was selected to form a new squadron of
R.A.A.F. personal, currently serving in England, to return to Australia,
with the very latest bomber aircraft “ The Lincoln”, to instruct R.A.A.F.
personel in Australia, in the use of this aircraft, for the purpose of bombing
Japanese mainland. The Commanding Officer of this squadron, requested
that I join his crew.

While waiting for this operation to take place, our new crew were employed
flying to Berlin in Germany and Bari in Italy, bringing home British prisoners
of war. After three such trips the war against Japan ended.

Shortly after, along with all Australian Aircrew, I returned to Australia,
on the British troop ship, ATHLONE CASTLE, via the Suez Canal and Bombay,
India, arriving at Port Melbourne in Nov. 45, aged 20 years and 7 months. My
family and many other families were waiting to welcome us home.

Thereafter, I was quickly demobilized and returned to my pre-war occupation
with the Post Master General’s Department.