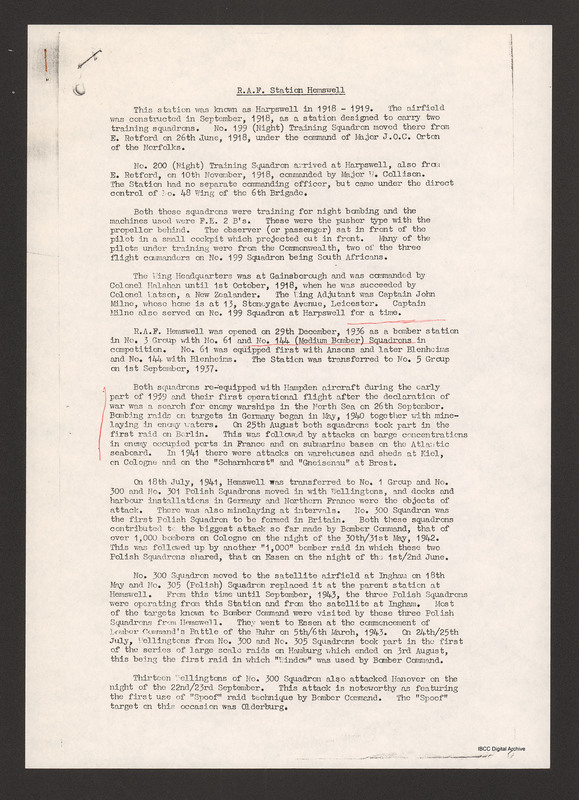 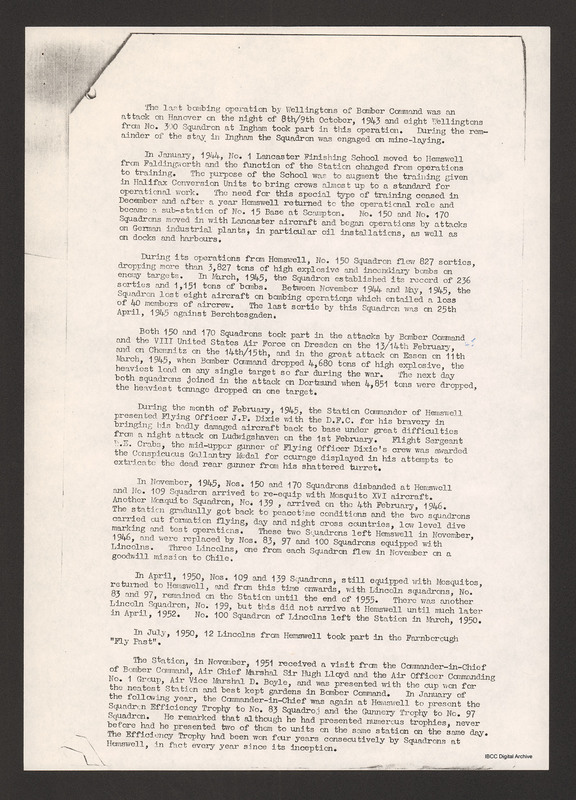 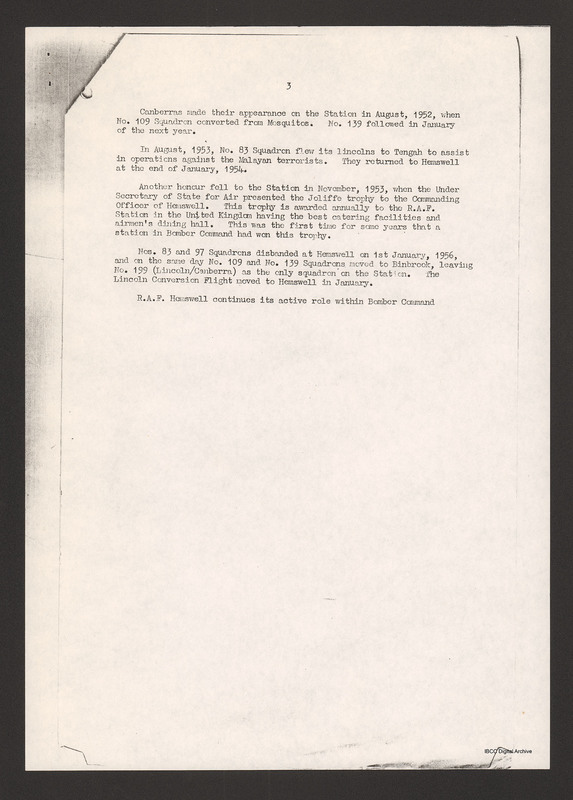 Outlines the history of RAF Hemswell starting from its origin as RAF Harpswell in 1918 until peacetime operations in the the 50s. The station was equipped with Ansons, then Blenheims. Part of No 3 Group, 61 and 144 Squadrons. Changed to No 5 Group, reequipped with Hampdens. Transferred to No 1 Group. 300 and 301 Squadrons moved in with Wellingtons in 1941. 300 Squadron moved to Ingham and 305 replaced it. Document contains details of various bombing operations. 150 and 170 Squadrons moved in with Lancasters during 1944.

[underlined] R.A.F. Station Hemswell [/underlined]
This station was known as Harpswell in 1918 – 1919. The airfield was constructed in September, 1918, as a station designed to carry two training squadrons. No. 199 (Night) Training Squadron moved there from E. Retford on 26th June, 1918, under the command of Major J. O. C. Orton of the Norfolks.
No. 200 (Night) Training Squadron arrived at Harpswell, also from E. Retford, on 10th November, 1918, commanded by Major W. Collison. The station had no separate commanding officer, but came under the direct control of No. 48 Wing of the 6th Brigade.
Both these squadrons were training for night bombing and the machines used were F. E. 2 B’s. These were the pusher type with the propellor [sic] behind. The observer (or passenger) sat in front of the pilot in a small cockpit which projected out in front. Many of the pilots under training were from the Commonwealth, two of the three flight commanders on No. 199 Squadron being South Africans.
The Wing Headquarters was at Gainsborough and was commanded by Colonel Halahan until 1st October, 1918, when he was succeeded by Colonel Watson, a New Zealander. The Wing Adjutant was Captain John Milne, whose home is at 13, Stoneygate Avenue, Leicester. Captain Milne also served on No. 199 Squadron at Harpswell for a time.
R.A.F. Hemswell was opened on 29th December, 1936 as a bomber station in No. 3 Group with No. 61 [underlined] and No. 144 (Medium Bomber) Squadrons [/underlined] in competition. No. 61 was equipped first with Ansons and later Blenheims and No. 144 with Blenheims. The station was transferred to No. 5 Group on 1st September, 1937.
[inserted] red line [/inserted]
Both squadrons re-equipped with Hampden aircraft during the early part of 1939 and their first operational flight after the declaration of war was a search for enemy warships in the North Sea on 26th September. Bombing raids on targets in Germany began in May, 1940 together with minelaying in enemy waters. On 25th August both squadrons took part in the first raid on Berlin. This was followed by attacks on barge concentrations in enemy occupied ports in France and on submarine bases on the Atlantic seaboard. In 1941 there were attacks on warehouses and sheds at Kiel, on Cologne and on the “Scharnhorst” and “Gneisenau” at Brest.
On 18th July, 1941, Hemswell was transferred to No. 1 Group and No. 300 and No. 301 Polish Squadrons moved in with Wellingtons, and docks and harbour installations in Germany and Northern France were the objects of attack. There was also minelaying at intervals. No. 300 Squadron was the first Polish Squadron to be formed in Britain. Both these squadrons contributed to the biggest attack so far made by Bomber Command, that of over 1,000 bombers on Cologne on the night of the 30th/31st May, 1942. This was followed by another “1,000” bomber raid in which these two Polish Squadrons shared, that on Essen on the night of the 1st/2nd June.
No. 300Squadron moved to the satellite airfield at Ingham on 18th May and No. 305 (Polish) Squadron replaced it at the parent station at Hemswell. From this time until September, 1943, the three Polish Squadrons were operating from this Station and from the satellite at Ingham. Most of the targets known to Bomber Command were visited by these three Polish Squadrons from Hemswell. They went to Essen at the commencement of Bomber Command’s Battle of the Ruhr on 5th/6th March, 1943. On 24th/25th July, Wellingtons from No. 300 and No. 305 Squadrons took part in the first of a series of large scale raids on Hamburg which ended on 3rd August, this being the first raid in which “Window” was used by Bomber Command.

Thirteen Wellingtons of No. 300 Squadron also attacked Hanover on the night of the 22nd/23rd September. This attack is noteworthy as featuring the first use of “Spoof” raid technique by Bomber Command. The "Spoof” target on this occasion was Olderburg.
[page break]
The last bombing operation by Wellingtons of Bomber Command was an attack on Hanover on the night of 8th/9th October, 1943 and eight Wellingtons from No. 300 Squadron at Ingham took part in this operation. During the remainder of the stay in Ingham the Squadron was engaged on mine-laying.
In January, 1944, No. 1 Lancaster Finishing School moved to Hemswell from Faldingworth and the function of the Station changed from operations to training. The purpose of the School was to augment the training given in Halifax Conversion Units to bring crews almost up to a standard for operational work. The need for this special type of training ceased in December and after a year Hemswell returned to the operational role and became a sub station of Mo. 15 Base at Scampton. No. 150 and No. 170 Squadrons moved in with Lancaster aircraft and began operations by attacks on German industrial plants, in particular oil installations, as well as on docks and harbours.
During its operations from Hemswell, No. 150 Squadron flew 827 sorties, dropping more than 3,827 tons of high explosive and incendiary bombs on enemy targets. In March 1945, the Squadron established its record of 236 sorties and 1,151 tons of bombs. Between November 1944 and May, 1945, the Squadron lost eight aircraft on bombing operations which entailed a loss of 40 members of aircrew. The last sortie by this Squadron was on 25th April, 1945 against Berchtesgaden.
Both 150 and 170 Squadrons took part in the attacks by Bomber Command and the VIII United States Air Force on Dresden on the 13th/14th February, and on Chemnitz on the 14th/15th, and in the great attack on Essen on 11th March, 1945, when Bomber Command dropped 4,680 tons of high explosive, the heaviest load on any single target so far during the war. The next day both squadrons joined in the attack on Dortmund when 4,851 tons were dropped, the heaviest tonnage dropped on one target.
During the month of February, 1945, the Station Commander of Hemswell presented Flying Officer J. P. Dixie with the D.F.C. for his bravery in bringing his badly damaged aircraft back to base under great difficulties from a night attack on Ludwigshaven [sic] on the 1st February. Flight Sergeant W. E. Crabs, the mid-upper gunner of Flying Officer Dixie’s crew was awarder the Conspicuous Gallantry Medal for courage displayed in his attempts to extricate the dead rear gunner from his shattered turret.
In November, 1945, Nos. 150 and 170 Squadrons disbanded at Hemswell and No. 109 Squadron arrived to re-equip with Mosquito XVI aircraft. Another Mosquito Squadron, No. 139, arrived on the 4th February, 1946. The station gradually got back to peacetime conditions and the two squadrons carried out formation flying, day and night cross countries, low level dive marking and test operations. These two Squadrons left Hemswell in November, 1946, and were replaced by Nos. 83, 97 and 100 Squadrons equipped with Lincolns. Three Lincolns, one from each Squadron flew in November on a goodwill mission to Chile.
In April, 1950, Nos. 109 and 139 Squadrons, still equipped with Mosquitos, returned to Hemswell, and from this time onwards, with Lincoln squadrons. No. 83 and 97, remained on the Station until the end of 1955. There was another Lincoln Squadron, No. 199, but this did not arrive at Hemswell until much later in April, 1952. No. 100 Squadron of Lincolns left the Station in March, 1950.
In July, 1950, 12 Lincolns from Hemswell took part in the Farnborough “Fly Past”
The Station, in November, 1951 received a visit from the Commander-in-Chief of Bomber Command, Air Chief Marshall Sir Hugh Lloyd and the Air Officer Commanding No. 1 Group, Air Vice Marshal D. Boyle, and was presented with the cup won for the neatest Station and best kept gardens in Bomber Command. In January of the following year, the Commander-in-Chief was again at Hemswell to present the Squadron Efficiency Trophy to No. 83 Squadroj[sic] and the Gunnery Trophy to No. 97 Squadron. He remarked that although he had presented numerous trophies, never before had he presented two of them to units on the same station on the same day. The efficiency Trophy had been won four years consecutively by Squadrons at Hemswell, in fact every year since its inception.
[page break]
Canberras made their appearance on the Station in August, 1952, when No. 109 Squadron converted from Mosquitos. No. 139 followed in January of the next year.
In August, 1953, No. 83 Squadron flew its Lincolns to Tengah to assist in operations against the Malayan terrorists. They returned to Hemswell at the end of January, 1954.
Another honour fell to the Station in November, 1953, when the Under Secretary of State for Air presented the Joliffe Trophy to the Commanding Officer of Hemswell. This trophy is awarded annually to the R.A.F. Station in the United Kingdom having the best catering facilities and airman’s dining hall. This was the first time for some years that a station in Bomber Command had won this trophy.
Nos. 83 and 97 Squadrons disbanded at Hemswell on 1st January, 1956, and on the same day No. 109 and No. 139 Squadrons moved to Binbrook, leaving No. 199 (Lincoln / Canberra) as the only squadron on the Station. The Lincoln Conversion Flight moved to Hemswell in January.
R.A.F. Hemswell continues its active role within Bomber Command