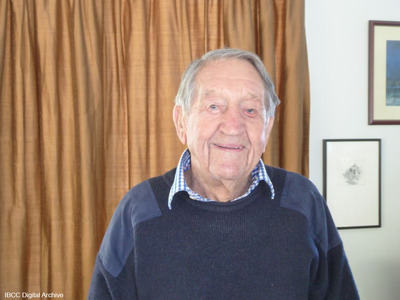 Cecil Parsons flew with 35 and 58 Squadrons in Bomber Command.

DB: Ok. This interview is being conducted for the International Bomber Command Centre. The interviewer is Doreen Burge. The interviewee is Cecil Parsons. The interview is taking place at Mr Parsons home in Ocean Grove, Victoria, Australia on August the 17th, 2016. Now, is it alright if I call you Boz?
CP: Certainly.
DB: Ok. Can you tell me what your birth date is?
CP: 12th of September 1918.
DB: Right. So you’re soon to turn ninety eight.
CP: That’s right.
DB: And where were you born?
CP: In Colac, Victoria.
DB: So not too far from here.
CP: No. No.
DB: And you grew up on a farm or —
CP: Yes. My father had a property near Beeac. Between Beeac and [Kirk?], and that’s where I was born, the youngest of a family of six.
DB: Right. So did you have a cattle farm or sheep?
CP: It was a mixed farm, yes, and we all had horses.
DB: Yes.
CP: All the kids had horses. Dad was a very great cattle man and all the children grew up on horses. I was the youngest of six.
DB: So I bet you could ride well.
CP: Yes. I could. I could ride. I remember riding behind dad in the buggy and I’d always been told that if I looked around I’d fall off. And I did [laughs]
DB: Proved the point to you.
CP: Yeah.
DB: And so can you tell me any more about your family background?
CP: Yes. My mother came from a property near Colac. She was born in the country. My father was born in Gippsland and was on a farm from a very early age, and became a farmer and a very good stock man. And he died when I was only seven so — but I was the youngest of a family of six. So we were very much a country family.
DB: Yes. So your father came from Gippsland.
CP: Came from Gippsland. Yeah.
DB: And moved to Colac.
CP: Yeah. Yeah. That’s right.
DB: When he married.
CP: He came to Colac because my mother’s family had property at Colac.
DB: Right.
CP: And he bought into that family. Into that family’s properties. Yeah.
DB: And so when he died did you all still stay on the farm?
CP: No. We moved in to Geelong.
DB: Right.
CP: Because I was, when he died, he died when I was about seven and I was the youngest of the family of six, and we moved into Colac and then to Geelong.
DB: Yes.
CP: As a family.
DB: So the farm, the farm was sold.
CP: Yes. Sold off.
DB: Yes. And so what — you did your schooling in Geelong.
CP: In Geelong. Yes.
DB: Yes.
CP: Yes.
DB: And your brothers and sisters were all there too.
CP: All educated in, in Geelong. Yeah.
DB: So you haven’t moved too far away.
CP: [laughs] No.
DB: That’s right. So after your schooling what did you do?
CP: I went to, I went to school in Geelong and after schooling I went to university in Melbourne, and into residential college. Trinity College. And —
DB: So that’s at Melbourne University.
CP: Melbourne University.
DB: Yes.
CP: And at the end of those three years it was 1939 and the war came. And I went to the war.
DB: And so what made you decide to go, go to the war?
CP: It became almost automatic I think at that time. I thought of nothing else but going to the war. I finished my university degree in ’39 and went straight in to the air force.
DB: So you were twenty one then or about twenty one.
CP: Twenty one.
DB: Yes. And what made you go for the air force rather than the army or the navy?
CP: Family. Cousins. Friends. And also I was very much attached to flying. My cousins had been flying, and there wasn’t any other thought of doing anything else.
DB: So you really wanted to be a pilot.
CP: Yes.
DB: Right from the start.
CP: Yes.
DB: Yes. Now I’m just going to stop this for a minute to make sure we can hear you alright.
[recording paused]
DB: So Boz do you recall where you signed up? Was it in Melbourne or —?
CP: Indeed in Melbourne. I was, I was at university at the time.
DB: Yes.
CP: And so that was — signed up in 1940 I think.
DB: And so where was your training, most of your training held? Do you remember?
CP: Yes. Indeed. I went almost straight to Narromine and started flying on Tiger Moths.
DB: So is that in New South Wales?
CP: Yes.
DB: Yes.
CP: Yes. In central New South Wales. Near Forbes.
DB: Ah yes.
CP: Yeah. And that was the main training. This was early on in the war because it would have been in November of 1940.