Letter from Mervyn Adder to his brother Alex 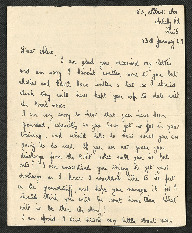 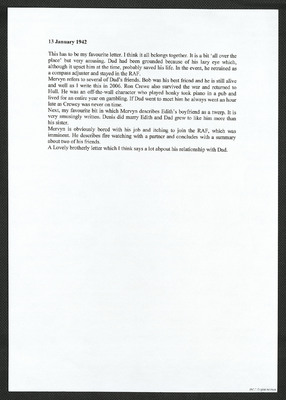 Letter from Mervyn Adder to his brother Alex

Letter and accompanying explanatory text. Sorry to hear that Alex had been grounded and asked about his future. Catches up with news of a number of friends as well as sister Edith and other family members. Mentions his social life and meeting girl friend. Mentions he is still waiting for call up to the RAF and describes activities. Continues with news of other mutual friends an acquaintances.

I am glad you received my letter and am sorry I haven’t written more to you, but Mother and Edith have written a lot so I should think they will have kept you up to date with the local news.

I am very sorry to hear that you have been grounded, especially as you have got so far in your training, and would like to hear what you are going to do now. If you are not given your discharge from the R.A.F what will you be put onto? I can understand you trying to get your discharge as I know I wouldn’t like to be put on the groundstaff, and hope you manage it for I should think you will be sent home then. What will it be then – the Army!

I am afraid I have heard very little about your

friends but I am sure you will be interested in the little I can tell you so here goes.

I met Bob’s Uncle on the car the other day, who told me Bob was having a very good time, but as he said, Bob always says he is having a good time so you don’t know whether he is in the thick of it or not.

I went round to the Sharpe’s last Saturday to see if Sid was playing Soccer for us, [deleted] and [/deleted] his mother showed me a few photo’s [sic] of Herbert which were taken in some town, it looked fairly modern so I should think it was a large town. His mother said that on one of his letters there was an Indian stamp, which made them wonder if he had been moved or not, however he told them not to take any notice of the stamp so as far as I know he is still in the same country.

I saw Ron Crewe at a dance at the Bev. Rd. Baths on Saturday night and he told me they had just received permission to volunteer which he has done

so and expects to go for his medical very shortly. He has volunteered for aircrew duties in the R.A.F. He also told me that Ken is back from Canada and is now somewhere near Bournemouth.

Edith seems to have got it fairly badly with that Dennis kid, much to mothers [sic] annoyance who doesn’t like him at all, in fact relations here have been very strained for the past week or two. The main reason for mother not liking him is, I suppose, that he is a Roman Catholic, it doesn’t sound very fair but there is a lot more to it than that. He came over for a few days, which included Christmas and didn’t increase his popularity. Father and I played cards together on Christmas night, we fortified ourselves of course by the usual method – drinking rum, and when we asked D. to join in he wouldn’t, but very unsociably said he would rather read his book. His book was a book of poems – no sarcastic remarks please – which

he occaisonally [sic] read from, no doubt for Edith’s pleasure. He bought Edith a book for Christmas, fancy a blinking book, and what a book ‘A Testament of Friendship’. I am telling you all this, as I believe they both seem to be going very strong with each other, and to show that you were right when you said he was a twerp. I hope this affair will fade out like the rest of Edith’s many romances, but this is going stronger than the rest – [deleted] and [/deleted] it would be the queerest she has had yet.

I went down to Mary’s again just before Christmas and had a great time, if her father will let her she is coming to stay at our place for a weekend very shortly and I am certainly looking forward to that.

She is working in the Food Office at Epworth, a small place a couple of miles from Belton, and likes it very much there. She is bored of the country though and misses the good dances etc so that it should be a nice change for her

when she comes over for the weekend, we certainly intend going to a dance. It might sound strange and you can believe it or not, but I haven’t been out with another woman since Mary went to live at Belton.

I suppose you will want to know a little [inserted] about [/inserted] what I am doing now, very little as regards the War effort I am afraid, but that’s not my fault for I should have been in the R.A.F over a year now, if it hadn’t been for some fool at Head Office. By the way I wrote to the Air Ministry a fortnight ago and told them I was tired of waiting to be called, and was doing very little at the Office, [deleted] and [/deleted] [inserted] I [/inserted] was surprised and disappointed to receive a reply, which was that they couldn’t bring forward my date of call for training and it would be early March before I was recalled.

I go to lectures at the V.R. class on Thursday

and Friday nights, or I should say some Thursdays and some Friday’s, as I have done Morse and Navigation on and off for the last two years and have had my share of theory.

I usually go to the pictures about twice a week and [deleted] went [/deleted] dancing once a week until just recently, when I have not been so regularly. As I believe I have mentioned before in the letter I went to the Bev. Rd Baths last Saturday and had a fairly good time although I had a cold which prevented me dancing very much. I went with Gee, and we spent the evening listening to the band, which was Norris Walker’s, and a very good band both for listening to and for dancing. I think I will take Mary there when she comes over.

The rest of my spare time seems to be spent firewatching, as we now have to do it every six days at work, which is

a nuisance although the subsistence allowance comes in very useful. We now have a wirless [sic] installed which makes it much brighter and I [deleted] am [/deleted] have a new partner he is our temp, he is about two years younger than I am but we get along very well together. We usually go to a show before going to work then listen to the radio until fairly late, before having our supper and going to bed. We lark about a lot and have had some great rough houses with the blankets and pillows, Geoff is taller than I am but I have the advantage in weight so that I usually finish sitting on top of him. We have great difficulty in getting up in the morning, in fact one morning Geoff was still in bed when some of the office staff arrived, we therefore don’t arrive back from breakfast until after ten o’clock. One Sunday morning we stayed in bed so late listening to the radio

that Edith rang up to see where I was.

Louis is now in the Navy and is training somewhere down South, he mentioned in his last letter that Bert had finished his training and is now in a submarine. I have written to him but haven’t received a reply yet.

Don has finished his EFTS and is either on his way, or is now in Canada, he expects to get his wings as soon as he starts flying again over there. I believe they do give them their wings early in the F.A.A. and get their commission just before they pass out.

I am afraid this letter has become so mixed up [deleted] that [/deleted] [inserted] & [/inserted] I cannot find anything else to tell you at the moment so will just sign off with best wishes from everybody here & hoping to see you soon.

P.S. Sorry about the writing – in a hurry – using Mother’s pen as well, mine is at mend.

This has to be my favourite letter. I think it all belongs together. It is a bit ‘all over the place’ but very amusing. Dad had been grounded because of his lazy eye which, although it upset him at the time, probably saved his life. In the event, he retrained as a compass adjuster and stayed in the RAF.

Mervyn refers to several of Dad’s friends. Bob was his best friend and he is still alive and well as I write this in 2006. Ron Crewe also survived the war and returned to Hull. He was an off-the-wall character who played honky tonk piano in a pub and lived for an entire year on gambling. If Dad went to meet him he always went an hour late as Crewey was never on time.

Next, my favourite bit in which Mervyn describes Edith’s boyfriend as a twerp. It is very amusingly written. Denis did marry Edith and Dad grew to like him more than his sister.

Mervyn is obviously bored with his job and itching to join the RAF, which was imminent. He describes fire watching with a partner and concludes with a summary about two of his friends.

A Lovely brotherly letter which I think says a lot abpout [sic] his relationship with Dad.