Letter to Mr Monks from the Air Ministry and enclosed documents 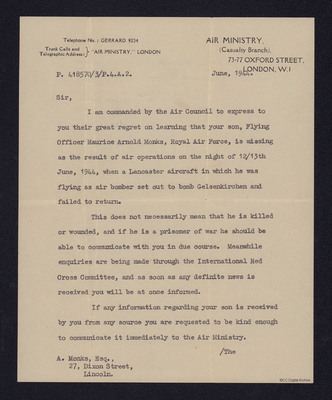 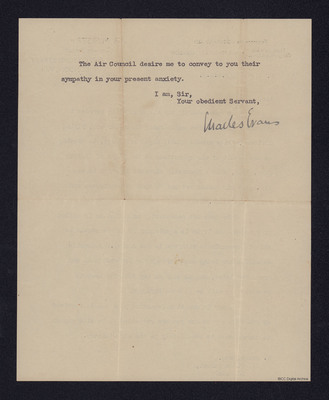 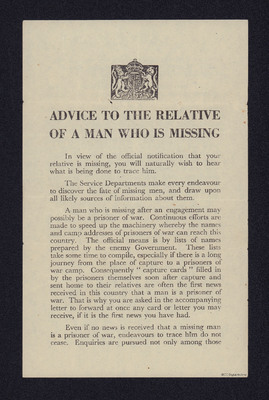 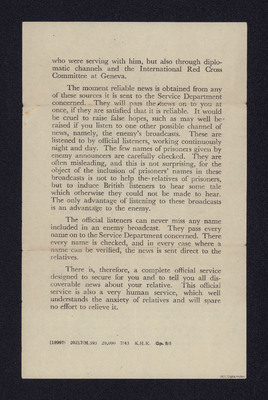 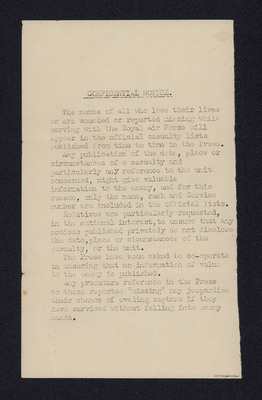 Letter to Mr Monks from the Air Ministry and enclosed documents

Informs him that his son was missing in as a result of air operations on the night of 12/13 June 1944 when his Lancaster in which he was flying as air bomber set out to bomb Gelsenkirchen and failed to return. Includes a notice of advice to the relative of a man who is missing and a confidential notice advising that any publishing of information about the date, place or circumstances of casualty or reference to their unit could give valuable information to the enemy.

AIR MINISTRY,
(Casualty Branch),
73-77 OXFORD STREET.
LONDON, W.1.
Telephone No.: GERRARD 9234
Trunk Calls and Telegraphic Address: “AIR MINISTRY,” LONDON
June, 1944.
P. 418570/3/P.4.A.2.
Sir,
I am commanded by the Air Council to express to you their great regret on learning that your son, Flying Officer Maurice Arnold Monks, Royal Air Force, is missing as the result of air operations on the night of 12/13th June, 1944, when a Lancaster aircraft in which he was flying as air bomber set out to bomb Gelsenkirchen and failed to return.
This does not necessarily mean that he is killed or wounded, and if he is a prisoner of war he should be able to communicate with you in due course. Meanwhile enquiries are being made through the International Red Cross Committee, and as soon as any definite news is received you will be at once informed.
If any information regarding your son is received by you from any source you are requested to be kind enough to communicate it immediately to the Air Ministry.
/The
A. Monks, Esq.,
27, Dixon Street,
Lincoln.
[page break]
The Air Council desire me to convey to you their sympathy in your present anxiety.
I am, Sir,
Your obedient Servant,
[signature]
[page break]
[crest]
ADVICE TO THE RELATIVE OF A MAN WHO IS MISSING
In view of the official notification that your relative is missing, you will naturally wish to hear what is being done to trace him.
The Service Departments make every endeavour to discover the fate of missing men, and draw upon all likely sources of information about them.
A man who is missing after an engagement may possibly be a prisoner of war. Continuous efforts are made to speed up the machinery whereby the names and camp addresses of prisoners of war can reach this country. The official means is by lists of names prepared by the enemy Government. These lists take some time to compile, especially if there is a long journey from the place of capture to a prisoners of war camp. Consequently “capture cards” filled in by the prisoners themselves soon after capture and sent home to their relatives are often the first news received in this country that a man is a prisoner of war. That is why you are asked in the accompanying letter to forward at once any card or letter you may receive, if it is the first news you have had.
Even if no news is received that a missing man is a prisoner of war, endeavours to trace him do not cease. Enquiries are pursued not only among those
[page break]
who were serving with him, but also through diplomatic channels and the International Red Cross Committee at Geneva.
The moment reliable news is obtained from any of these sources it is sent to the Service Department concerned. They will pass the news on to you at once, if they are satisfied that it is reliable. It would be cruel to raise false hopes, such as may well be raised if you listen to one other possible channel of news, namely, the enemy’s broadcasts. These are listened to by official listeners, working continuously night and day. The few names of prisoners given by enemy announcers are carefully checked. They are often misleading, and this is not surprising, for the object of the inclusion of prisoners’ names in these broadcasts is not to help the relatives of prisoners, but to induce British listeners to hear some tale which otherwise they could not be made to hear. The only advantage of listening to these broadcasts is an advantage to the enemy.
The official listeners can never miss any name included in an enemy broadcast. They pass every name on to the Service Department concerned. There every name is checked, and in every case where a name can be verified, the news is sent direct to the relatives.
There is, therefore, a complete official service designed to secure for you and to tell you all discoverable news about your relative. This official service is also a very human service, which well understand the anxiety of relatives and will spare no effort to relieve it.
[page break]
[underlined] CONFIDENTIAL NOTICE. [/underlined]
The names of all who lose their lives or are wounded or reported missing while serving with the Royal Air Force will appear in the official casualty lists published from time to time in the Press.
Any publication of the date, place or circumstances of a casualty and particularly any reference to the unit concerned, might give valuable information to the enemy, and for this reason, only the name, rank and Service number are included in the official lists.
Relatives are particularly requested, in the national interest, to ensure that any notices published privately do not disclose the date, place or cicumstances [sic] of the casualty, or the unit.
The Press have been asked to co-operate in ensuring that no information of value to the enemy is published.
Any premature reference in the Press to those reported “missing” may jeopardise their chance of evading capture if they have survived without falling into enemy hands.