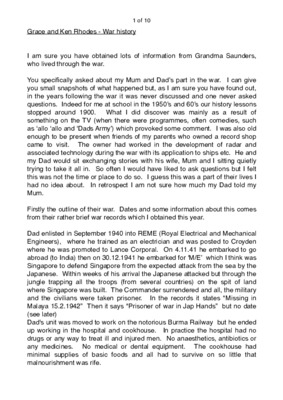 A description of their time during the war by their daughter. Her father joined the Royal Electrical and Mechanical Engineers in September 1940. He was captured by the Japanese in Singapore, 1942. He was released on 12 September 1945 and came home on a hospital ship.
Her mother enlisted in the RAF in October 1941 and became a driver.
Included are some of her father's stories of his time as a prisoner.
There is his first postcard home as a prisoner, a photo of 'Your Finest Hour', photos of the Spitfire model given to her mother, a copy of a letter sent to prisoners of war held by the Japanese, from the King, a photo of Uncle Wally in Army uniform and photos of her father and mother at the start of the war.