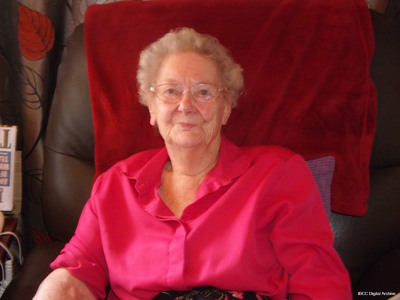 During the war, Pauline's siblings Bernard, Guy, Robert and Peter served in the air force and army, her mother volunteered for the Red Cross, and her father volunteered as an air raid warden. Inspired by her brothers, Alexander joined Women’s Auxiliary Air Force in 1942 and completed clerical duties at RAF Waddington, RAF Skellingthorpe, and RAF Stradishall, before being demobilised in 1946. Although she did not necessarily enjoy her service, she notes that it was a life-shaping experience. Alexander also recounts the harrowing wartime experiences of her family members, including the deaths of her father and three brothers, and how her mother coped with their losses. Finally, she recalls her postwar life including working for the Marconi Company, meeting her husband, and raising their two children.