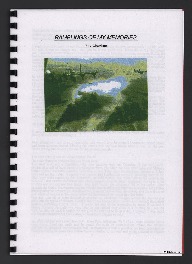 A twelve-page type written memoir by Ray Charlton, entitled 'Ramblings of my Memories'. It begins with his acceptance for aircrew in August 1942, continues with his call up in July 1943, and then a training period until joining a crew as Flight Engineer, flying Stirlings. Following a conversion course, he was posted to 630 Squadron at East Kirkby, flying Lancasters. There follow many anecdotes relating to his time at East Kirkby until the end of the war in Europe, when the Australian members of his crew were sent home.