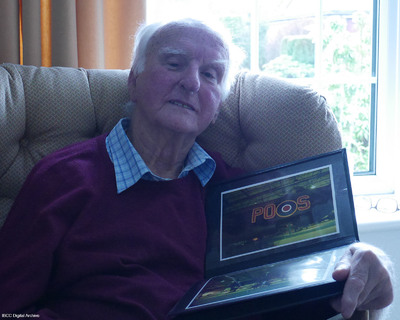 John Thorp was born and raised in Manchester where he attended North Manchester Grammar School. At seventeen he joined the Home Guard. When he was eighteen he volunteered for the RAF with dreams of becoming a pilot. While waiting at Heaton Park to transfer to further training overseas he became increasingly frustrated with the lack of progress. When invited to volunteer to train as a gunner he decided to accept because he wanted to progress. After training he was posted with his crew to 467 Squadron at RAF Waddington. Returning from the operation on D-Day he saw the massed armada waiting to sail to the landing grounds in Normandy. On take-off to an operation there was a loud bang heard throughout the aircraft. When they returned from the target they tested the undercarriage and the wheel flew past John’s turret. They had to effect an emergency landing at Woodbridge and the pilot completed a remarkable landing.