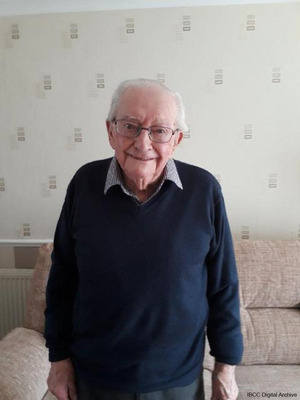 Hayden Philip Rose was born on the 27th of July 1924. After leaving school he worked in the Simmonds factory office before joining the RAF in 1943, training as an engineer. His brothers also joined, becoming a pilot and a navigator. Upon meeting his crew at RAF Aldwark Manor they were posted to RAF Riccall where they trained on Halifaxes, before joining 426 Squadron at RAF Linton-on-Ouse.
On their 20th operation, they were hit by anti-aircraft fire upon which they bailed out near Dordrecht, and the pilot was killed in action. The crew were then held at German headquarters in Frankfurt for interrogation and eventually sent to Stalag Luft 7. He reports that when the Russians reached the camp they gave them rifles to kill as many Germans as they could. They took back six heads to prove that they had killed them.
He flew back in June 1945. After three weeks leave, he completed further training before being posted to RAF Cottam, where he stayed until 1948. Rose recounts his life after demobilisation, including working in South Africa and keeping in touch with his crew.