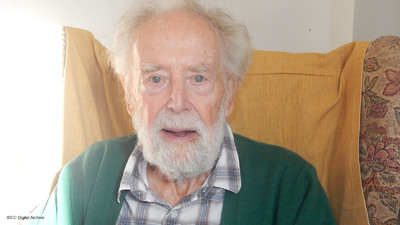 David Rose was born in Swanage, Dorset. His father had been in the Medical Corps during the First World War and suffered ill health afterwards. David believed his father had as much reason to be on the War Memorial as his two brothers who died during the conflict. David attended the local Grammar School in Swanage and then continued his education in Bath. He volunteered for the RAF and was very surprised that the RAF decided that he being a flight engineer would suit his skills. He joined a crew and was posted to 50 Squadron at RAF Skellingthorpe. After his tour of operations David became an entertainment officer. He wanted to continue this work and was accepted by the Guildhall School of Music and Drama. He went on to work for a touring company which was based in Essen and then for the BBC and eventually became Chief Commissioning Editor for Channel 4. He felt that his skipper in Bomber Command had a big influence on him right through into his peacetime life.