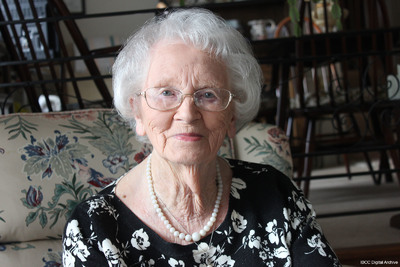 Betty (nee Jackson) worked in a library in Macclesfield before the war. When the war broke out, she went to Manchester to volunteer for the Air Force and trained as a telephonist. She did a course at Sheffield General Post Office before being posted to RAF Bridgnorth for training and then to 16 Maintenance Unit at RAF Stafford. Following training as a Teleprinter Operator at RAF Blackbrook she re-mustered and was posted to RAF Cranwell. She was released for three months to look after her ailing mother and was called back to the RAF in December 1944, being posted to RAF Scampton and later to RAF Syerston and then RAF Coningsby, where she stayed until being demobbed. When at RAF Scampton she was billeted in Nissen huts at RAF Dunholme Lodge. She handled Bomber Command intelligence report messages whenever a crew returned and met Guy Gibson. Betty met her husband Stan, a civilian General Post Office engineer, when being stationed at RAF Coningsby. Betty remembered a RAF officer who had a cloth embroidered with names of staff, but it had since been lost. When Betty and Stan married, they lived at RAF Woodhall Spa. Betty said she had loved every minute of her time in the RAF.