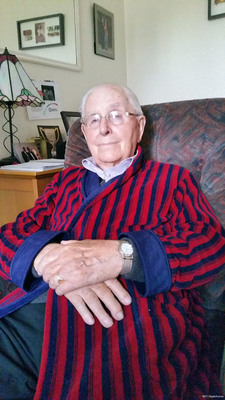 Arthur Baxter Reid from Edinburgh was in the Home Guard before he joined the RAF. He trained as a wireless operator. While training he flew on a test flight with a pilot. The plane crashed and caught fire. The pilot leapt out of his window leaving Arthur inside. He used an axe to get free. Arthur was posted to 100 Group, 192 Squadron. On an operation to attack the Scharnhorst their aircraft had engine failure and they had to return. As they were flying slowly they soon had the experience of being joined by other stricken aircraft returning from the actual operation in various stages of damage. On one operation their special operator said an aircraft was coming up behind them but the rest of the crew could not see anything. After a few moments Arthur looked to the side and saw a JU-88 flying alongside. They continued to fly together until they both waggled their wings and promptly left the area.