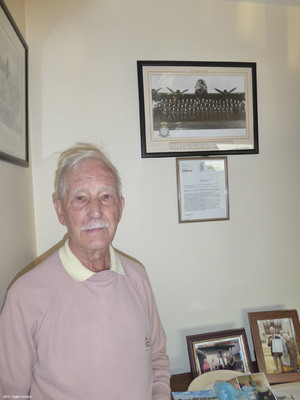 Eddie Humes flew as a navigator on Lancasters with 514 squadron during the war. He chose to join the RAF in May 1939 instead of going to work in the mines. He was initially expected to be posted as a rigger on aircraft but was then sent to a balloon training centre, which didn’t please him very much. After finishing training, he applied for transfer to aircrew, but was posted to a balloon drifter on the Thames and from there, to the East End in London. Then his posting to aircrew came through and so he transferred to St John’s Wood for aircrew training and then to St Andrews and to Manchester, where he trained to be a navigator. Was then posted to RAF Chipping Warden on Wellingtons, RAF Little Snoring and to RAF Waterbeach on 514 Squadron. Remembers his first operation to Biarritz. Gives a vivid and detailed account of when they were shot down in 1944 over Belgium, on the way back home from Aachen, when the port wing was hit. Six members of the crew died in the crash, leaving him the sole survivor, breaking his leg in the landing. He was taken by a Belgian family but, because of his severe injuries, he was handed over to the Germans, who brought him to hospital, where he underwent surgery and spent a long period of convalescence. He then spent the rest of the war being moved from camp to camp, in Belgium, Germany and Poland and was then forced to march hundreds of miles from Poland to Austria, from where he was sent to France and repatriated. After the war, he went into teaching and ended up as a deputy head, until his retirement. He joined the squadron association and together with the association’s secretary, his engineer’s nephew, he went to Belgium to build a memorial to his lost crew.